Janus kinase (JAK) is an intracellular non-receptor tyrosine kinase. There are four members of the JAK family: JAK1, JAK2, JAK3, and Tyrosine kinase 2 (TYK2). JAK can link cytokine signals from membrane receptors to activators of transcription (STAT), transducing cytokine-mediated signals via the JAK-STAT signaling pathway. When the receptor binds to its respective cytokine ligand, it leads to a conformational change. Furthermore, that induces autophosphorylation of JAK, which enables it to further phosphorylate and activate the signal transduction and transcriptional activator STAT. So STAT further phosphorylates and binds to each other to form a dimer that is then transferred to the nucleus. Thus, it binds to DNA and regulates gene transcription.

JAK-STAT signaling is one of the major signaling pathways utilized by cytokine receptors. Since the discovery of this pathway, many studies have elucidated the important role of JAK-STAT signaling on cell growth, development, differentiation, and survival. This has also provided new directions for the study of human health and disease. The inhibitors of the JAK-STAT pathway have become important targets in modern medical research.

Janus kinase (JAK) inhibitors are immunomodulatory drugs. They can inhibit the activity of one or more Janus kinase family enzymes and block cytokine signaling, thereby interfering with the JAK-STAT signaling pathway in lymphocytes. JAK inhibitors have applications in treating cancer and inflammatory diseases, such as rheumatoid arthritis; and a growing number of skin conditions, including vitiligo, baldness, atopic dermatitis, and psoriasis.

TK4g is a JAK inhibitor for leukemia cancer research. 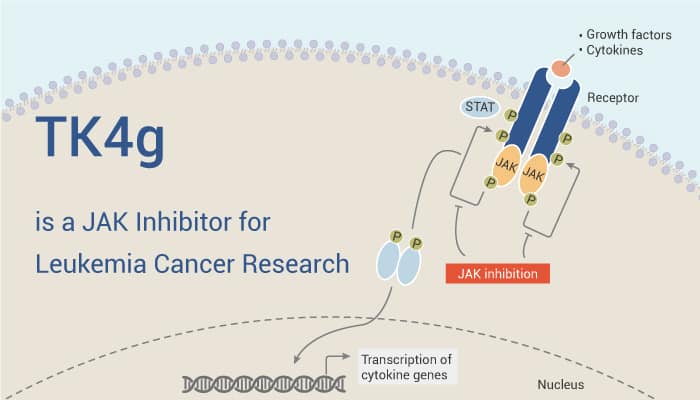 JAK exists in all cells, with JAK1, JAK2 and TYK2 thought to be commonly expressed, while JAK3  predominantly presents in lymphoid tissues. JAK3 is potentially a selective regulator of lymphatic development and functional control within the immune system. JAK2 and JAK3 are associated with myeloid leukemia, inflammation and autoimmune diseases. JAK2 is the only member of the JAK family that pairs with itself. It mediates the production of interleukin 3 (IL-3), interleukin 6 (IL-6) and granulocyte-macrophage colony-stimulating factor (GM-CSF). In contrast, an imbalance of IL-3 and GM-CSF signaling increases differentiation, leading to lymphogenic disorders and myelofibrosis (bone marrow/blood cancer). JAK3 also plays a key role in related lymphoid development through the IL-2, IL-4 and IL-7 pathways.

TK4g is a potent JAK inhibitor with IC50 values of 12.61 nM and 15.80 nM for JAK2 and JAK3, respectively. TK4g, as a dual JAK2/3 inhibitor, is an effective pathway for the treatment of a variety of diseases such as lymphogenic disorders, myelofibrosis and cancer.

In conclusion, TK4g is a potent JAK inhibitor for lymphatic-related diseases and leukemic cancers.

WL47 is a Selective, High-Affinity, Disrupter of Cavolin-1 Oligomers