The p53 tumor suppressor induces cell growth arrest and apoptosis in response to DNA damage or stress. And inactivation of the p53 pathway plays an indispensable role in tumor survival. Approximately p53 mutations resulting in loss of its function account for 50% human cancers. And the wild-type p53, present in the remaining 50% of malignancies, is downregulated by the MDM2 oncoprotein via a direct protein-protein interaction. Subsequently, MDM2 inhibits p53 activity by blocking p53 mediated transactivation, inducing nuclear export of p53. Additionally, it acts as E3 ubiquitin ligase targeting both itself and p53 for the degradation by the 26S proteasome. Since all of these mechanisms can be blocked by neutralizing the MDM2-p53 interaction, MDM2-p53 interaction inhibitors have been considered as a promising strategy to reactivate the p53 pathway in wild-type p53 tumors over the last two decades. 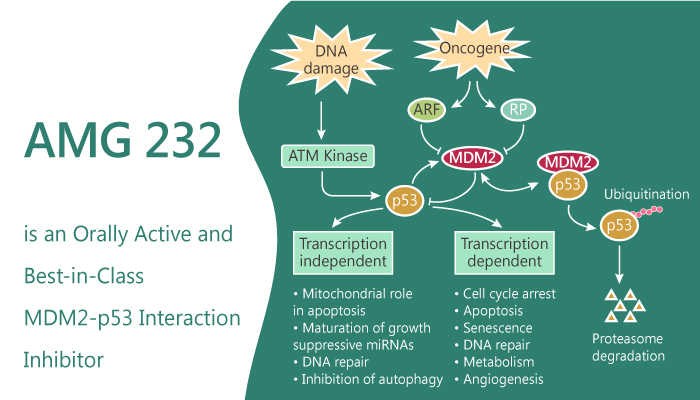 OT-82 is an Orally Active NAMPT Inhibitor with Antineoplastic Activity