Lysine-specific histone demethylase 1 (LSD1) (also known as KDM1) is a member of a broad family of monoamine oxidases and is encoded by the KDM1A gene. However, LSD1 requires the flavin adenine dinucleotide (FAD) as a cofactor to catalyze demethylase activity. For example, LSD1 catalyzes demethylation at H3K4me1/2 and H3K9me1/2. And it also catalyzes demethylation of nonhistone protein p53 and DNMT1. The dysregulation and overexpression of LSD1 are associated with a variety of cancer types, especially cancers that are characterized as morphologically poorly differentiated. As such, the abnormal dysregulation of LSD1 leads to differentiation arrest in both hematological tumors and solid tumors, making it an attractive target for cancer therapy. 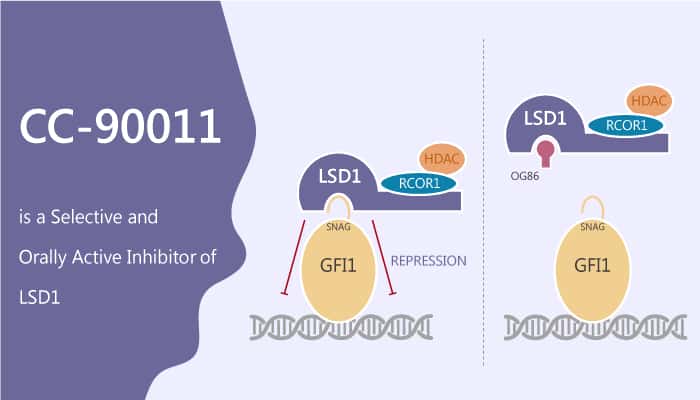 To sum up, CC-90011, a highly effective and orally active LSD1 inhibitor, providing a novel differentiation strategy for the treatment of neuroendocrine tumors and AML.