METTL3/14 plays a critical role in disorders associated with abnormal self-renewal, aberrant proliferation, and blocking differentiation of hematopoietic cells. Both METTL3 and METTL14 are upregulated in all subtypes of AML, despite the heterogeneity of this blood cell cancer in terms of chromosomal rearrangement and gene mutations. AML and B-cell lymphoma are among the cancers with the highest expression of METTL3 in the Cancer Genome Atlas database. In this study, UZH1a is a potent and selective METTL3 inhibitor, with an IC50 of 280 nM. It has the potential for the research of epitranscriptomic modulation of cellular processes. UZH1a also can be as a chemical probe for studying METTL3. METTL3 is the writer enzyme of the N6-methyladenosine (m6A) modification of RNA. It has a good potential for the development of a lead compound against AML. 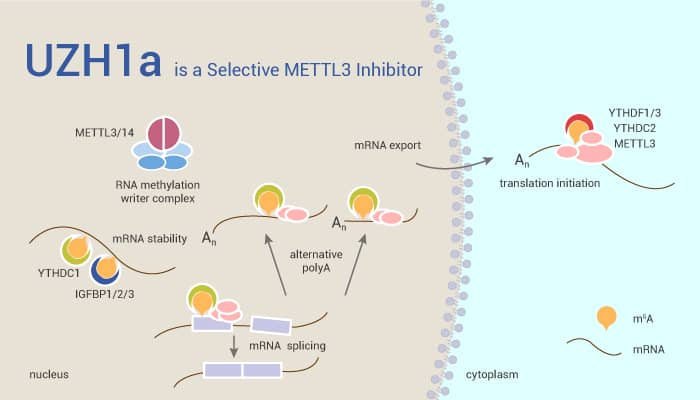 In summary, UZH1a shows high-nanomolar potency in the biochemical assay. It also has good selectivity against a panel of protein methyltransferases and kinases. Furthermore, it is active in cells. Importantly, METTL3 chemical inhibition induces apoptosis in AML MOLM-13 cells, while osteosarcoma U2Os cells and the embryonic kidney cell line HEK293T seem to be less reliant on cellular m6A level for their survival. Thus, UZH1a has a good potential for the development of a lead compound against AML.

Purinostat mesylate is a Selective HDAC Inhibitor With anti-Leukemia Effects

BTSA1 is a High Affinity and Orally Active BAX Activator