Prostaglandins play an important role in modulating both physiological and inflammatory processes. They can act as autocrine factors regulating platelet aggregation, vascular tone, and secretions. Additionally, the synthesis of prostaglandin depends on the activity of cyclooxygenase (COX).
There are existing two isoforms: COX-1 and COX-2. They are highly homologous in sequence. And they show differences in one amino acid at their COX catalytic sites. COX-1 is constitutively expressed in most tissues. In contrast, COX-2 is always highly induced at sites of inflammation and cell proliferation. As a result, COX-2 selective inhibitors always have anti-inflammatory and analgesic activity.

In this article, we will introduce a potent, selective, and orally active COX-2 inhibitor, Lumiracoxib. 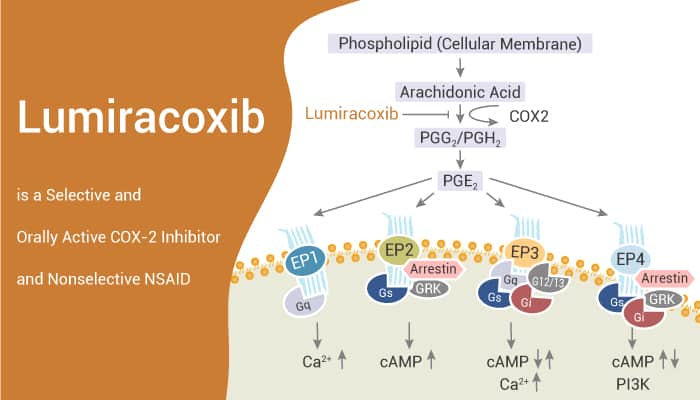 Lumiracoxib inhibits purified COX-1 and COX-2 with Ki values of 3 μM and 0.06 μM, respectively. Additionally, in cellular assays, Lumiracoxib has an IC50 of 0.14 μM in COX-2-expressing dermal fibroblasts. However, Lumiracoxib causes no inhibition of COX-1 at concentrations up to 30 μM in HEK293 cells transfected with human COX-1.

Besides, in a human whole blood assay, IC50 values for Lumiracoxib are 0.13 μM for COX-2 and 67 μM for COX-1, respectively.
In rats, after a single dose of Lumiracoxib, It significantly reverses the established hyperalgesia with a maximal 58% reversal observed 3 h.
In a rat model of bone cancer pain with an injection of MRMT-1 tumor cells into one tibia. Lumiracoxib significantly attenuates the weight-bearing difference observed on days 14, 17 and 20. After repeated administration significantly reverses static allodynia measured 90 min following the final administration. Summarily, in this model, Lumiracoxib has an effect on mechanical hyperalgesia in a model of bone cancer pain. And it also reduces the radiologically observed structural changes.

In conclusion, as a potent inhibitor, Lumiracoxib acts as a nonselective NSAID with anti-inflammatory, analgesic, and antipyretic activities. Lumiracoxib can be used for osteoarthritis and bone cancer research.