Today, cancer has become one of the most severe diseases in the world. People often turn pale at the mentioning of cancers. Tumors mainly have two types: malignant tumors and benign tumors. The former always causes death. Among these terrible diseases, the brain tumor is simply a disaster.

Nuclear hormone receptors are a class of transcriptional factors. They regulate the growth, differentiation, and homeostasis of cells. Their agonists also have an effect on brain tumors. However, their effect on brain tumor stem cells (BTSCs) is not clear. Constitutive androstane receptor (CAR) is a member of the nuclear hormone receptor family, regulates xenobiotic and endobiotic metabolism. So, it is a question of whether they inhibit BTSCs or not. 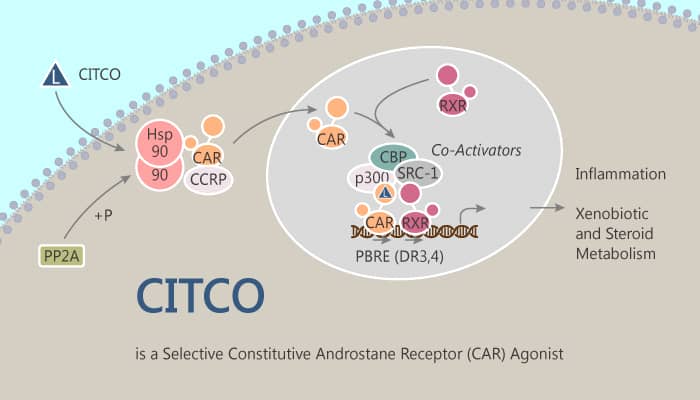 CITCO is a derivative of imidazothiazole, acts as a selective agonist of human CAR. It exhibits an EC50 of 49 nM for CAR, with more than 50-fold selectivity over the pregnane X receptor, and no effect on other nuclear receptors.

Based on the potent activity of CITCO, researchers undergo further study in cells. In BTSCs, CITCO increases CAR expression at 25μM. Moreover, it suppresses the expansion of CD133+ BTSCs. CITCO also causes cell cycle arrest, inhibits the proliferation and induces apoptosis of BTSCs.

Subsequently, researchers examined CITCO in mice. As a result, the intraperitoneal injection of CITCO inhibits the tumor growth in nude mice bearing BTSCs.