Photodynamic therapeutic (PDT) is an established treatment modality for cancer. It utilizes a photosensitive compound accompanied by low-energy light of a specific wavelength. The combination of these two independently nontoxic components produces extensive cellular, vascular, and tissue damage in an oxygen-dependent manner, via reactive oxygen species (ROS) generation, resulting in tumor ablation.  The cellular response to PDT is highly complex and differs dramatically depending on a number of factors such as cell genotype, the photosensitizer used, the dose and light fluence applied, and the intracellular localization of the photosensitizer. The author reveals the photophysical characteristics of the ADPM family, as well as fundamental in vitro biological characteristics of the lead therapeutic, ADPM06. The characteristics include cytotoxicity and activity in hypoxia. All in all, ADPM06 is a novel nonporphyrin PDT agent. ADPM06 exhibits IC50s in the micro-molar range in human tumor cells and induces apoptosis. 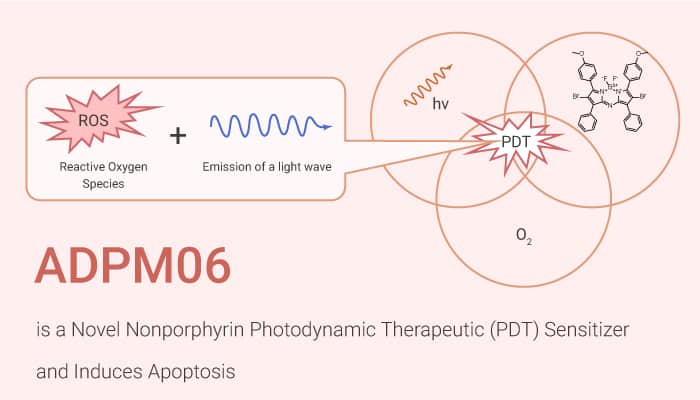 The efficacy of ADPM01 is completely ablated at a 1% oxygen level in Hela and MRC5 cell lines. ADPM06 displays only a partial reduction in light-induced activity in hypoxic as compared to normoxic conditions. ADPM06-PDT induces ER stress and unfolded protein response. It also induces apoptosis and involves caspase enzymatic activity. Following ADPM06-PDT, rapid processing of XBP1 mRNA occurs resulting in the removal of an intron from the mRNA in a spliceosome-independent manner, a post-transcriptional modification catalyzed by the action of activated inositol-requiring protein 1 (IRE1). ADPM06-PDT-induced apoptosis involves the generation of ROS. In addition, it has revealed an initiation of apoptosis in vivo, as well as induction of an ER stress response. ADPM06-PDT is well tolerated in vivo. Furthermore, it elicits impressive complete response rates in various models of cancer when applied in a short drug-light interval.

In summary, ADPM06 is an emerging non-porphyrin PDT.  It is also an exciting novel PDT agent with significant potential for further translational development.