DUSP-MKPs dephosphorylate and inactivate the MAPKs extracellular signal-regulated kinase (ERK), JNK/SAPK, and p38 on tyrosine and threonine residues. As a result, they result in regulating the duration and amplitude of mitogenic and survival signaling.

There exists a  body of literature which subjects to support the role of DUSP-MKPs in cancer.

It has been demonstrated that in most cancers, such as prostate, gastric, breast, pancreatic, ovarian, non-small-cell lung, and metastatic colorectal cancer overexpresses the prototypic DUSP-MKP, DUSP1/MKP-1.

In this article, we will describe a potent and tumor cell-selective dual-specificity MAPK phosphatase (DUSP-MKP) inhibitor, BCI-215. 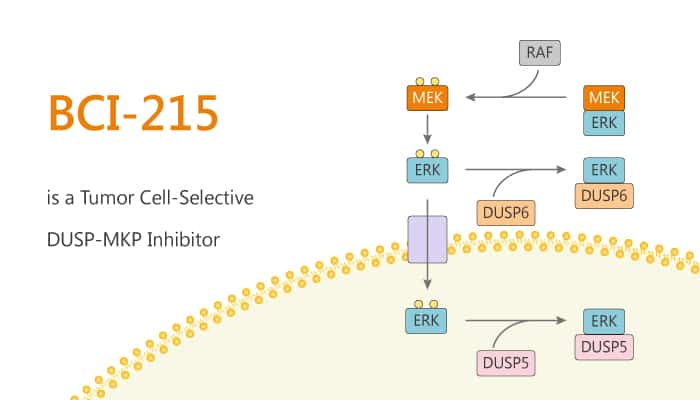 Firstly, in vitro, in HeLa cells, BCI-215 can increase pERK levels in DUSP-overexpressing cells with an IC50 value in the micromolar range as a concentration-dependent manner.

Since BCI-215’s biologic activities are not obscured by toxicity, this small molecule is the first to prove that target DUSP-MKPs is a dependency of cancer cell survival. In contrast to previous DUSP-MKP inhibitors, BCI-215 selectively kills cancer cells but spares cultured hepatocytes.

In MDA-MB-231 human breast cancer cells, BCI-215 inhibits the survival and motility of those cells. However, it does not affect the viability of hepatocytes. Besides, when the concentration ups to 100 µM, BCI-215 is completely devoid of hepatocyte toxicity.

BCI-215 does not generate ROS in hepatocytes or in developing Zebrafish larvae. It has anti-migratory and proapoptotic activities in breast cancer cells that correlate with the induction of ERK phosphorylation. BCI-215 (20 µM; 1 hour) induces mitogenic and stress signaling in cancer cells without generating ROS. It induces a stress response that is not dependent on oxidation.

In conclusion, BCI-215 is a promising DUSP-MKP inhibitor. It has cytotoxicity for tumor cells but not normal cells. BCI-215 has the potential to be a complement to cancer immunotherapy.

PU-H54, a Grp94-selective Inhibitor, Can be Used for Breast Cancer Research