Estrogen receptor (ER) is a ligand-induced intracellular transcription factor that mediates the biological effects of estrogen at the level of most gene regulation. The biological effect of estrogen is mediated by ER, which is a member of nuclear receptor family. Specifically, these receptors act as ligand-activated transcription factors. There are two kinds of ER: nuclear ERα and ERβ. Besides, ER is in perimembrane, mitochondria, and nucleus of the estrogen-dependent target tissue. Moreover, it has similar but different regulatory potential. Different intracellular localization of ER leads to dynamic integration and fine-tuning of E2 signaling cascade, which coordinates cell growth, differentiation, and death.

Furthermore, ER plays a role by regulating the transcription process. The classical mechanism of ER involves the binding of estrogen to receptors in the nucleus. The receptor then dimerizes and binds to a specific response element called estrogen response element (ERE) located in the promoter of the target gene. Meanwhile, membrane-associated ER mediates the non-genomic effects of estrogen, which can lead to changes in protein function and regulation of gene expression in the cytoplasm. Nonetheless, estrogen and the ER are prominent drivers of breast tumorigenesis and breast cancer progression. Here, we will introduce an orally available selective estrogen receptor degrader (SERD), Elacestrant. 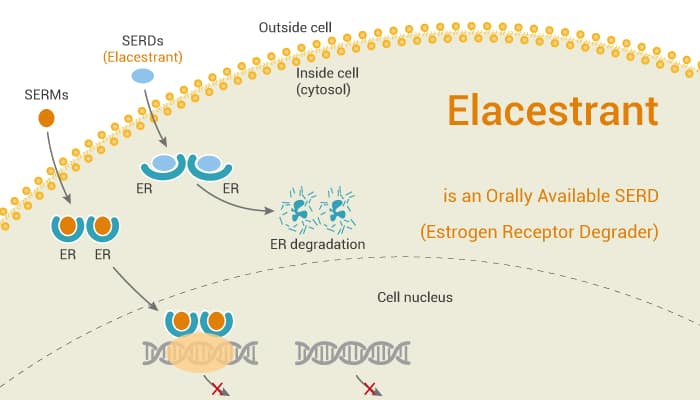 First of all, Elacestrant is a selective SERD with IC50s of 48 and 870 nM for ERα and ERβ, respectively. Elacestrant selectively binds and degrades ER. Importantly, Elacestrant is an effective antagonist of ER-positive breast cancer cell proliferation. Particularly, Elacestrant has a high affinity for ERα, resulting in rapid and complete degradation of the ER.

All in all, Elacestrant is an orally available selective estrogen receptor degrader (SERD).

Sapanisertib is an Orally Active and ATP-Dependent mTOR Inhibitor

JG-98 is an Allosteric HSP70 Inhibitor For Cancer Therapy