Breast cancer is the leading cause of cancer mortality among women in Korea, England, and the United States of America. Invasion and metastasis are the most lethal characteristics of breast cancer. TGF-β signaling maintains homeostasis and elicits tumor-suppressive responses such as growth inhibition and apoptosis in normal mammary epithelial cells. The underlying TGF-β signaling mechanism which accounts for the switch in TGF-β signaling activities is not clear. The TGF-β1 ligand preferentially signals through TGF-β type II receptor (TβRII) and TGF-β type I receptor (TβRI), one of which is an ALK5 kinase. In most tumor types, TGF-β ligands overexpress. The development of TβRI kinase inhibitors has become an attractive target for drug development. In this study, EW-7195 is a potent and selective ALK5 (TGFβR1) inhibitor with an IC50 of 4.83 nM. It efficiently inhibits TGF-β1-induced Smad signaling, epithelial-to-mesenchymal transition (EMT), and breast tumor metastasis to the lung. 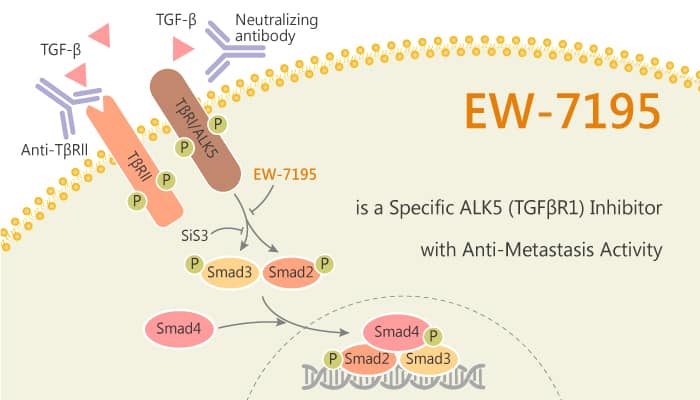 EW-7195, a novel inhibitor of ALK 5, inhibits EMT, motility, and invasiveness of breast cancer cells and the lung metastasis development.

In summary, EW-7195 blocks the effect of TGF-β1 on the levels of E-cadherin, ZO-1, N-cadherin, and vimentin. It also suppresses the mammary cancer metastasis to lung both in Balb/c xenograft model and in MMTV/cNeu mice model. EW-7195, a novel inhibitor of ALK 5, inhibited EMT, motility, and invasiveness of breast cancer cells in vitro and the lung metastasis development in both 4T1 orthopathologically grafted Balb/C and MMTV/cNeu transgenic mice in vivo.