In this article, we will introduce a potent, selective, and nonsteroidal inhibitor of aromatase, Fadrozole. It inhibits aromatase activity with an IC50 of 6.4 nM.
Fadrozole is a very potent inhibitor of both human placental and rat ovarian aromatase. 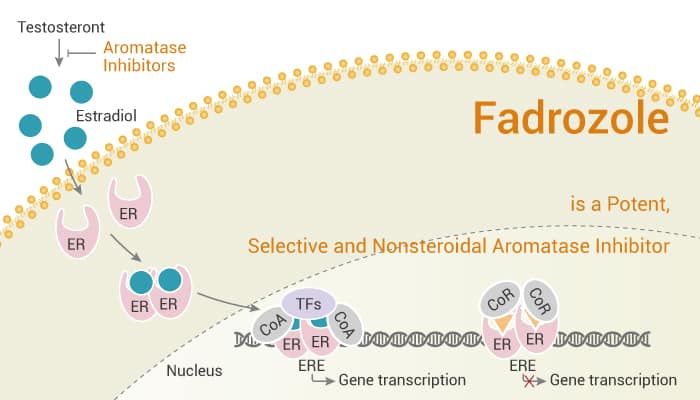 Fadrozole is also an effective suppressor of serum oestrone and E2 in humans. Furthermore, Fadrozole has been used in humans for treating some types of estrogen-dependent cancer.

What’s more, Fadrozole is able to inhibit the aromatase-mediated androstenedione-induced uterine hypertrophy with an ED50 of 0.03 mg/kg. In the same model, aminoglutethimide elicits the same effect with an ED50 of 30 mg/kg.

Fadrozole prevents the development of both benign and malignant spontaneous mammary neoplasns in female Sprague-Dawley rats.

Administration of fadrozole in male and female mice suppresses the production of 17b-estradiol. At the same time, it results in a 70% reduction in parasite burden. This protective effect is associated in male mice with a recovery of the specific cellular immune response.

And, the augmented interleukin-6 (IL-6) serum levels, together with a 10-fold increase in its expression in testes of infected male mice. Fadrozole treatment returns these levels to baseline values.

In conclusion, fadrozole is a potent inhibitor of aromatase and can be used for cancer research.