The uPAR·uPA protein-protein interaction (PPI) is involved in signaling and proteolytic events. They promote tumor invasion and metastasis.  Nearly every step of cancer metastasis, including cell migration, adhesion, angiogenesis, and invasion implicates uPAR. This has led to attempts to inhibit its protein interactions. IPR-803 emerges from a substructure search of commercial chemical libraries. It shows higher potency in blocking breast cancer invasion in cellular studies. In addition, IPR-803 binds directly to uPAR with a sub-micromolar affinity of 0.2 μM. Thus, IPR-803 is a potent inhibitor of the uPAR•uPA protein-protein interaction (PPI). 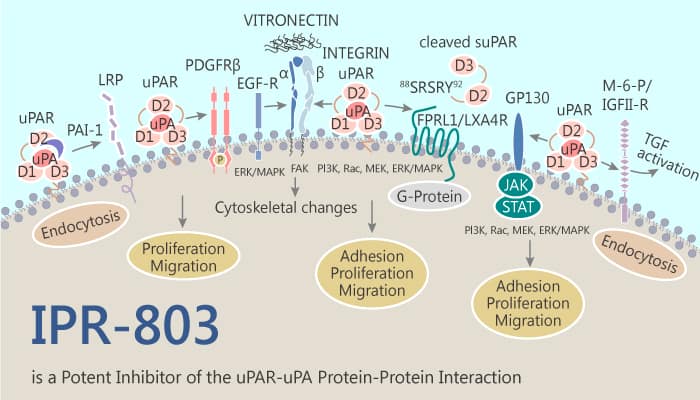 IPR-803 is a potent inhibitor of the uPAR•uPA protein-protein interaction.

In the MDA-MB-231 cells, IPR-803 can effectively prevent uPA from binding to uPAR, supporting the findings from our biochemical assays that it acts as a direct inhibitor of the PPI. IPR-803 also effectively inhibits matrix metalloproteinase (MMP-9) mediated degradation of gelatin in a concentration-dependent manner. IPR-803 inhibits MDA-MB-231 cell growth with an IC50 of 58 μM. Furthermore, in the presence of IPR-803, the authors observe a concentration-dependent impairment of cell adhesion with the IC50 of approximately 30 μM. However, it does not have a significant effect on apoptosis or necrosis. IPR-803 also shows inhibition of MAPK phosphorylation.

When administered orally, IPR-803 reaches a concentration of 5 μM in plasma. Moreover, The level of the compound in tumor tissue also reaches a high concentration of up to 10 μM and is stable even after 10 hours. The accumulation of the compound in the tumor ensures constant binding to uPAR and inhibition of uPA binding. IPR-803 has little effect on tumor growth in agreement with the weak cytotoxicity.

In summary, IPR-803 impairs metastasis to the lungs with only four of the treated mice showing severe or marked metastasis. IPR-803 is a promising template for the development of compounds with enhanced PK parameters and greater efficacy.