Alzheimer’s disease (AD) is one of the most common neurodegenerative diseases, accounting for more than 80% of dementia cases worldwide. AD leads to the progressive loss of mental capacity and behavior, with a functional decline in the ability to learn. HDAC6 belongs to the HDAC family, and its structure contains a cytoplasmic anchoring domain, which mediates its stable anchorage in the cytoplasm. The enzymatic activity of HDAC6 is exerted on tubulin, Hsp90, and cortactin substrates; thus it is a key regulator of the cytoskeleton and cell migration. HDAC6 interacts with tau in human brain tissues, and the inhibition of HDAC6 attenuates tau phosphorylation at T231, a critical regulatory site for tau function; however, it does not disrupt the HDAC6–tau interaction. Furthermore, HDAC6 inhibition also appeared to downregulate Aβ aggregation and improve cognition in an AD mouse model. MPT0G211 is a potent, orally active and selective HDAC6 inhibitor. 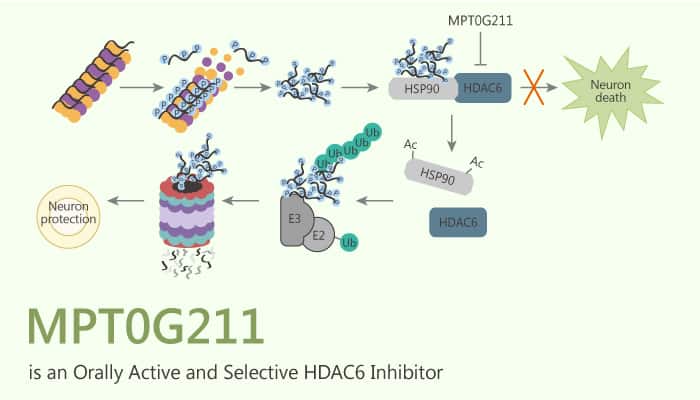 In summary, MPT0G211 appears to be a promising strategy for improving the AD phenotypes, including tau hyperphosphorylation and aggregation, neurodegeneration, and learning and memory impairment, making it a valuable agent for further investigation.

AGN194204 is an Orally Active and Selective RXR Agonist