PRDM9 is a zinc finger protein that binds DNA at specific locations in the genome and alleles influence human chromosomal rearrangements, causing hereditary diseases. MRK-740 is a potent selective and cell-active PRDM9 inhibitor with an IC50 of 80 nM. 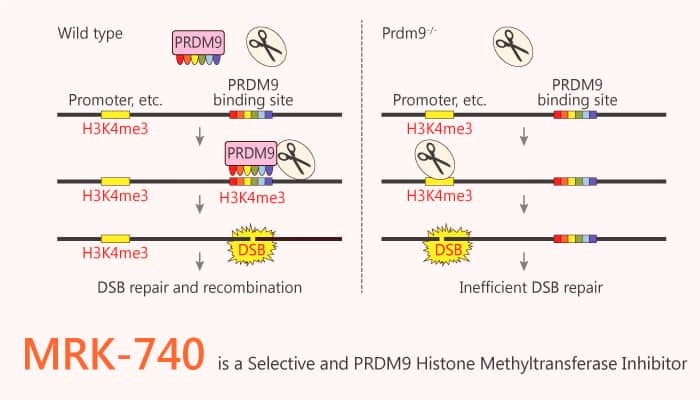 In cells, MRK-740 specifically and directly inhibits H3K4 methylation at endogenous PRDM9 target loci. Moreover, it binds in the substrate-binding pocket. The discovery of MRK-740 as a chemical probe for the PRDM subfamily of methyltransferases highlights the potential for exploiting SAM in targeting SAM-dependent methyltransferases. Using the enzyme activity assay, MRK-740 is selective against 32 protein, DNA and RNA methyltransferases and PRDM7.

In this study, researchers directly inhibit PRDM9 catalytic activity on chromatin, reducing H3K4me3 levels at intragenic and intergenic target sites. These results indicate that MRK-740 is a potent and cell-active PRDM9 inhibitor that together with the negative control compound MRK-740-NC, can serve as a useful tool for studying the physiological and pathological functions of PRDM9. MRK-740 specifically inhibits methylation on endogenous chromatin, but does not affect H3K4 methylation activity. Interestingly, MRK-740 also inhibits PRDM7 with an IC50 of 45 µM. A first-in-class PRDM inhibitor, it binds to PRDM9 in a SAM-dependent manner with an unusually large SAM interaction interface.

All in all, MRK-740 is a first-in-class chemical probe for PRDM9 that selectively inhibits its methyltransferase activity in biochemical and cellular assays.

SD-1029 is a JAK2/STAT3 Activation Inhibitor