In previous blog “MSX-122 is a Partial Antagonist of CXCR4”, I described MSX-122 as an orally available, specific small molecule antagonist of CXCR4/CXCL12. And it has good anti-inflammatory properties.

However, MSX-122 entered into clinical trials tested among breast cancer patients. Accordingly, MSX-122 is a promising clinical candidate for cancer treatment. A study from Zhongxing Liang has demonstrated that MSX-122 has both anti-tumor and anti-metastasis activities. 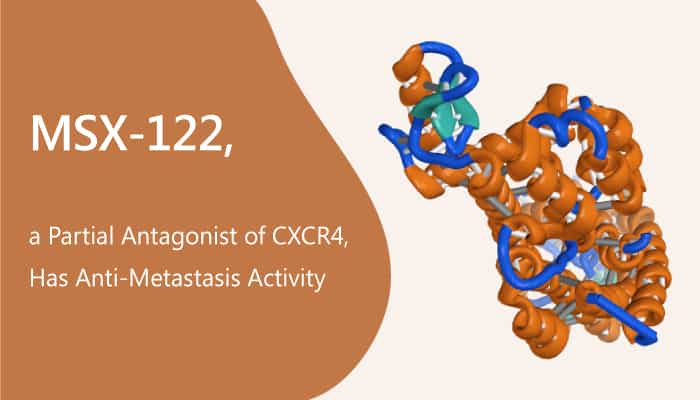 During the study, the authors used three different animal models to identify the anti-metastatic efficacy of MSX-122. For breast cancer metastasis, MSX-122ms, i.p. exhibited significantly less lung metastases. The estimated average areas of micrometastases on the lung surface from the control and treated groups were 47.5% and 13%, respectively. For SCCHN metastasis, as a result, the arm administered with MSX-122ms showed no evidence of metastases, similar to TN14003.

Metastasis is the leading cause of cancer related deaths. Ironically, as of now, there are no marketed therapies that specifically target and address the metastatic process. Interestingly, the CXCR4/CXCL12 interaction, and the resulting cell signaling cascade, has recently emerged as a therapeutic target as it plays a key role in metastatic progression. A few studies have demonstrated that MSX-122 inhibited tumor metastasis and inflammation in numerous in vitro and in vivo studies. The intended outcome of current work pave a way for CXCR4 targeted compounds as a promising anti-cancer drug, especially for metastasis.