The tumor suppressor p53 is a powerful growth-suppressive and proapoptotic protein. Murine double minute (MDM) 2 and MDMX, as its negative regulators, tightly controlls p53. These proteins bind p53 with their structurally similar N-terminal domains. Therefore, they effectively inhibit p53 transcriptional activity. But, it is only functional in MDM2, which serves as a specific E3 ligase and main regulator of p53 stability. MDMX does not have an intrinsic ligase activity and does not affect directly p53 stability. However, MDMX can enhance ligase activity of MDM2 toward p53 by forming MDM2/MDMX heterodimers. Thus, restoring p53 function via antagonizing the binding of MDM2 and MDMX to p53 is a potential strategy.  on the other hand, high levels of MDMX protein can make MDM2 antagonists ineffective in killing cancer cells. Thus, it is necessary to inhibit  MDM2 and MDMX simultaneously to release the full activity of stabilized p53.

Recent efforts have been focused on identification of dual MDM2/MDMX antagonists. 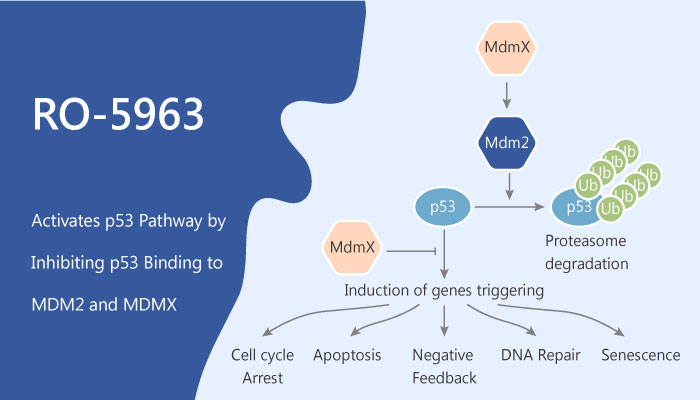 In summary, RO-5963 can restore p53 apoptotic activity in the presence of high levels of MDMX. It may offer a more effective therapeutic modality for MDMX-overexpressing cancers.

Seliciclib (Roscovitine) is an Orally Active and Selective CDKs Inhibitor

YKL-5-124 is a Selective, Irreversible and Covalent CDK7 Inhibitor