The Raf family consists of three members: A-Raf, B-Raf, and Raf-1. Ras/RAF/MEK extracellular signal-regulated kinase (ERK) pathway is relevant to the control of many basic cellular processes, including proliferation, survival, and differentiation. Specifically, Raf-1 and B-Raf can form heterodimers, which may be important for cell transformation. RAF protein is activated by Ras, a small GTPase located on the cell membrane. Besides, it can be activated in response to a variety of mitogens. The binding of RAF to Ras leads to the transfer of RAF from the cytosol to the activated cell membrane. Moreover, Activated Raf can then phosphorylate bispecific kinases MEK1 and Mek2, which in turn activates ERK.

Furthermore, Raf-1 is essential for the development and maintenance of Ras-driven tumors in vivo. BRAF is the only member of the Raf/MEK/ERK pathway that often finds mutations in human tumors, especially in melanoma. Recent data show that B-Raf is mutated in about 7% of human cancers. Meanwhile, B-Raf activates C-Raf in the cytoplasm in a ras independent manner. B-Raf activates the C-raf kinase domain and requires its residual kinase activity. Here, we will introduce an orally active Raf inhibitor, Sorafenib (Bay 43-9006). 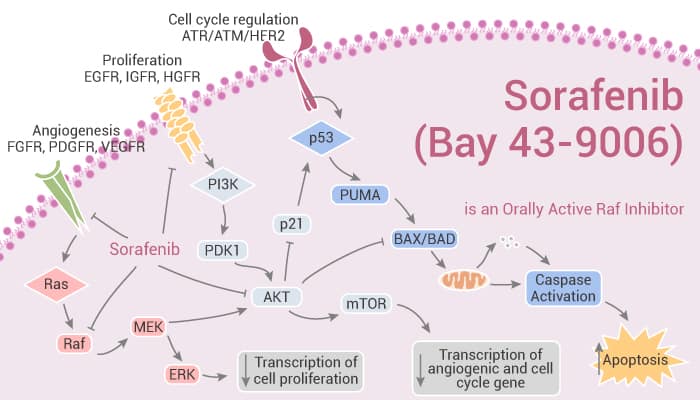 Thirdly, Sorafenib demonstrates broad oral antitumor efficacy in a panel of human tumor xenograft models. Daily oral administration of Sorafenib (30 to 60 mg/kg) produces complete tumor stasis during treatment in five of the six models. Obviously, Sorafenib shows a significant decrease in the liver index when compared to the DENA group.

GW7604, the Metabolite of GW5638, is a Selective Estrogen Receptor Downregulator (SERD)