Tumor cells use a variety of oncogenically- and environmentally driven metabolic pathways. That aims to meet the bioenergetic and biosynthetic demands of rapid and sustained growth. One of the key nutrients is the amino acid glutamine. It is the most abundant amino acid in plasma. Small-molecule inhibitors, suppressing the broadly expressed form of glutaminase (encoded by the gene GLS), has antitumor activity across a variety of tumor types. They include lymphoma, glioma, breast, pancreatic, non-small cell lung and renal cancers. In addition, elevated GLS expression is associated with high grade and metastatic breast cancer. In particular, triple-negative breast cancer (TNBC) primary tumors and cell lines have elevated GLS mRNA; this is associated with high glutamine consumption and/or enhanced reliance on exogenous glutamine for survival in vitro. In this study, Telaglenastat is a first-in-class, reversible and orally bioavailable glutaminase 1 (GLS1) inhibitor. 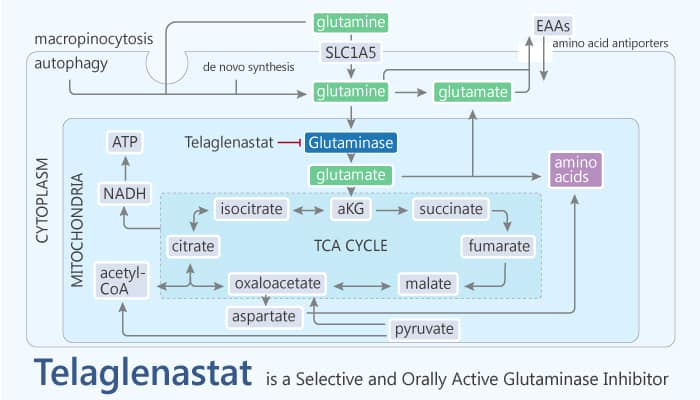 HS-131 is a near Infrared Dye Tethered Hsp90 Inhibitor