Aurora B Kinase is a serine-threonine kinase and plays an important role in mitosis. This kinase also plays an important role in mitosis as a serine-threonine kinase. It also a part of the chromosomal passenger complex (CPC).  Overexpression of Aurora B has been reported in several cancers, such as colorectal cancer, prostate cancer, and lung cancer.

As a result,  cancer research focuses on the inhibition of Aurora kinase B and result in a few promising molecules, such as SP-96 and SP-146. etc al.

In this article, we will introduce a potent Aurora B inhibitor, SP-146. 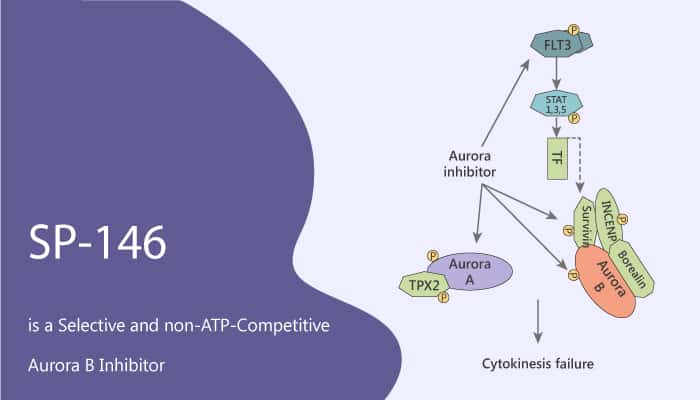 SP-146 is a highly potent, selective, and non-ATP-competitive Aurora B inhibitor with an IC50 of 0.316 nM. SP-146 can be used for the research of triple-negative breast cancer (TNBC).

In conclusion, SP-146 is a novel Aurora Kinase B  inhibitor and shows an improved selectivity profile compared to Barasertib. SP-146 exhibits growth inhibition of selective NCI60 cell lines, including MDA-MB-468.  SP-146 will serve as an excellent lead compound for  Aurora B inhibition and cancer study.

Tags:Aurora A, Aurora B, Myelosuppression, TNBC

Everolimus (RAD001), a Rapamycin Derivative, is a Selective and Orally Active mTOR1 Inhibitor

PI-273 is a First, Reversible and Specific PI4KIIα Inhibitor