The complement factor C5a is a 74-residue glycopolypeptide central to the complement system. “C5 convertase” cleaves the precursor C5 protein and it becomes the complement factor C5a. It mediates inflammation through the recruitment of leukocytes (such as neutrophils and macrophages), induction of cytokine release and neutrophil degranulation. C5a binds with equal affinity yet distinct binding mechanisms to receptors. The C5a receptor 1 (C5aR1) and C5a receptor 2 (C5aR2) mediates C5a activity.

C5aR1 is part of the G-protein coupled receptor superfamily. All myeloid cells, some lymphocytes, and nonmyeloid cells such as lung endothelial cells, alveolar and bronchial epithelial cells expresses C5aR1. It carries out much of the functional inflammatory activity of C5a. The inflammatory pathways induced by C5a become the target for therapeutic application through the use of C5aR1 antagonists, C5aR1 antagonists has the potential for the research of diseases such as inflammatory bowel disease, cancer, motor neuron disease, and rheumatoid arthritis. Multiple C5a peptide agonist has the application for interrogating the C5a receptor function but none show selectivity for C5aR1. No therapeutic application for C5aR1 activation has been developed, in part due to the lack of tools to selectively interrogate C5aR1.

In this article, we will introduce an anti-cancer agent BM213. 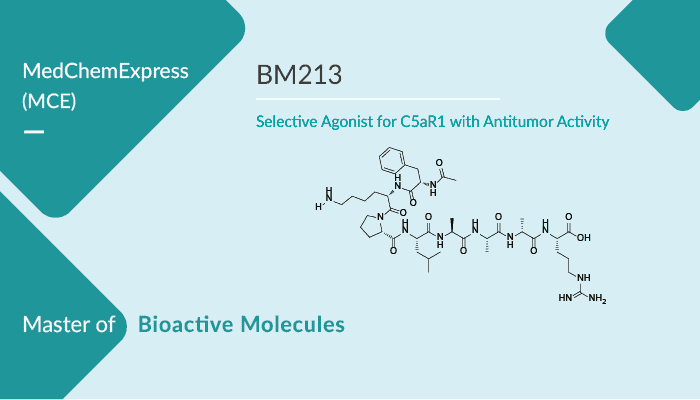 BM213 is a potent and selective agonist for complement C5a receptor 1.

BM213 displays no C5aR2 activity and over 1000-fold selectivity for C5aR1 over C3aR. This compound has EC50s of 59 nM and 52.8 mM for C5aR1 and C3aR, respectively. BM213 induces C5aR1-mediated calcium mobilization and pERK1/2 signaling but not β-arrestin recruitment. It also exhibits no signaling bias. BM213 significantly suppresses LPS-induced IL-6 and TNFα release from human macrophages at 1 μM.Moreover, this compound is a much more stable in serum and displays no cytotoxicity on SHSY-5Y cells. It results in a significant reduction in mammary carcinoma growth in a mouse model.

In conclusion, BM213 is a selective C5aR1 agonist. It will be a useful research tool to investigate C5aR1 function.

BrBzGCp2 is a Glyoxalase 1 Inhibitor, with Antitumor and Neuroprotective Activity