Actinomycin D is isolated from Streptomyces species, containing a phenoxazine chromophore and two cyclic pentapeptide lactone rings. Besides, Actinomycin D can inhibit DNA repair, DNA-directed RNA synthesis, or DNA synthesis via binding to double-stranded DNA and the phenoxazine chromophore inserting DNA bases. Therefore, it acts as a DNA intercalator and as a minor groove binding agent. Since the 1950s, Actinomycin D had been found to have anticancer activity and applied to clinical practice. This drug is widely used in researching various cancer, such as sarcomas, germ cell cancers, melanoma, and so on. 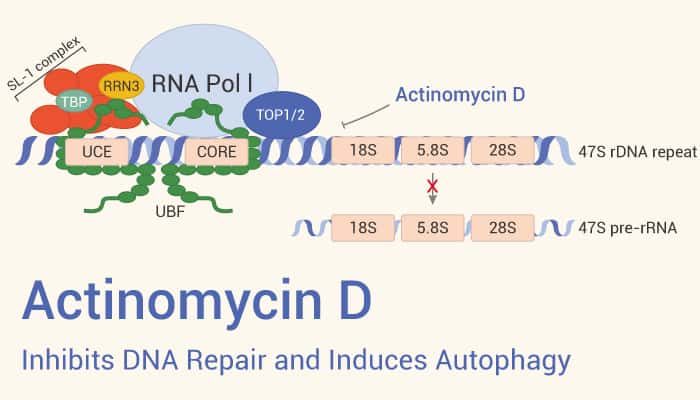 Because the guanine base has a preferred orientation with respect to the chromophore of Actinomycin D. All deoxyribodinucleotides containing guanine will form a complex with this drug.

In vitro and in vivo Studies

In cell experiments, Actinomycin D can markedly reduce the proliferation of vascular smooth muscle cells. It arrests cell cycle at G1-phase, and exhibits an IC50 of 0.4 nM and lethal dose LD50 of 260 μM. Besides, it can cause induction of apoptosis in primary chronic lymphocytic leukemia cells and B-cell lymphoma cell lines in a p53-independent manner. The experiment results show that Actinomycin D suppresses mRNAs expression of BCL2, LYN, and TOSO which are important for CLL cell survival.

ATH686 is a Selective and ATP-Competitive FLT3 Inhibitor

NSC-105808 is a Specific DNA2 Nuclease Inhibitor with Antitumor Activity

BI-9321, a First-in-Class Chemical Probe, is a NSD3-PWWP1 Inhibitor