BI-2852 is a KRAS inhibitor that binds with nanomolar affinity to a pocket, between switch I and II on RAS. Especially, BI-2852 is mechanistically distinct from covalent KRASG12C inhibitors because BI-2852 binds to a different pocket present in both the active and inactive forms of KRAS. Furthermore, BI-2852 modulates pERK and pAKT and has an antiproliferative effect in KRAS mutant cells. In cells, BI-2852 inhibits SOS1-catalyzed exchange of GDP to GTP as well as GAP-catalyzed exchange of GTP to GDP. This effect results in no net change in cellular GTP-RAS levels upon treatment. Moreover, BI-2852 reduces pERK and pAKT levels in a dose-dependent manner. This effect leads to an anti-proliferative effect in NCI-H358 cells. 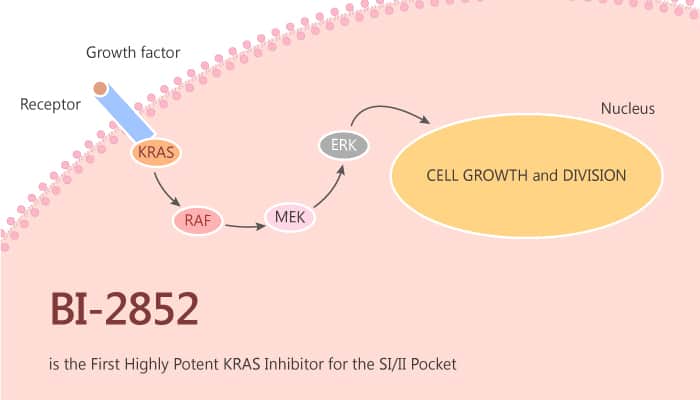 To summarise, BI-2852 will also serve as a useful chemical probe for the scientific community in the study of RAS biology of simultaneous inhibition of active and inactive RAS in an in vitro setting.

KB02-JQ1 is a Highly Potent and Selective PROTAC BRD4 Degrader