Bcl-2 (B-cell lymphoma 2) and Bcl-xL (B-cell lymphoma-extra large) are members of the Bcl-2 family of proteins. BCL-2 is localized to the outer membrane of mitochondria, where it plays an important role in promoting cell survival and inhibiting the actions of pro-apoptotic proteins. As well as, Bcl-xL acts as an anti-apoptotic protein by preventing the release of mitochondrial contents such as cytochrome c, which leads to caspase activation and ultimately, programmed cell death.

Bcl-2 and Bcl-xL always is overexpression in many different types of human tumors, which make tumor cells resistant to conventional cancer therapeutic agents. Therefore, small-molecule inhibitors of Bcl-2 and Bcl-xL may have a promising therapeutic potential for the treatment of human cancer.

BM-1074 has inhibitory activity against Bcl-2 and Bcl-xL. 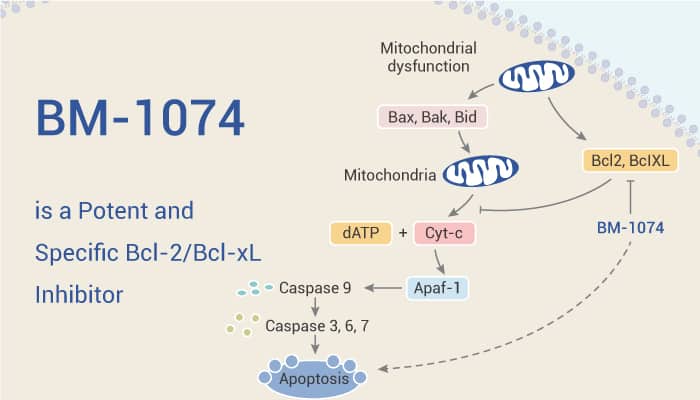 BM-1074 (15 mg/kg; i.v.; 5 days a week for 2 weeks) shows anti-tumor activity in the H146 xenograft tumors in SCID mice. Moreover, BM-1074 increases the expression of cleavage PARP and caspase-3 protein at both 3 and 6-hr time points in H146 tumor tissues. Furthermore, the results indicate the strong apoptosis induction in vivo. Additionally, BM-1074 decreases the tumor size and no significant weight loss (<5%) and did not show other signs of toxicity during or after the treatment.

In a word, BM-1074 is a potent and specific Bcl-2 and Bcl-xL inhibitor, possessing antiproliferative and anti-tumor activity.

PM-81I is a Potent STAT6 Inhibitor

ARS-1620, a G12C-Specific Inhibitor, is a Promising Candidate for KRAS-mutant Cancer