Topoisomerases (DNA topoisomerases) are enzymes that catalyze changes in the topological state of DNA, regulating the overwinding or underwinding of DNA. Topoisomerases play essential roles in DNA replication, transcription, chromosome segregation, and recombination. The winding problem of DNA arises due to the intertwined nature of its double-helical structure. All cells have two major forms of topoisomerases: type I enzymes and type II enzymes. Type I topoisomerase cuts one strand of a DNA double helix, relaxation occurs, and then the cut strand is reannealed. Type II topoisomerase cuts both strands of one DNA double helix, passes another unbroken DNA helix through it, and then reanneal the cut strands. DNA topoisomerases are important targets of approved and experimental anti-cancer agents.

Topoisomerase II is an essential enzyme that is required for virtually every process that requires the movement of DNA within the nucleus or the opening of the double helix. There are two subclasses of type II topoisomerases, type IIA and IIB. The two classes of topoisomerases possess a similar strand passage mechanism and domain structure. In order to carry out its critical physiological functions, topoisomerase II generates transient double-stranded breaks in DNA. Consequently, while necessary for cell survival, the enzyme also has the capacity to fragment the genome. In animals, topoisomerase II is a chemotherapy target. In prokaryotes, gyrase is an antibacterial target. Indeed, these enzymes are of interest for a wide range of effects. 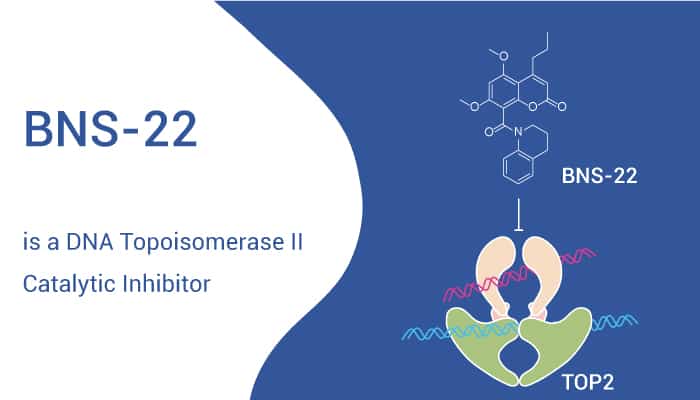 All in all, BNS-22 is a selective inhibitor of TOP2α and TOP2β that exhibits anti-proliferative activities.

Epoxomicin is a Selective and Irreversible Inhibitor of Proteasome