TRIM24 is a multidomain protein characterized as a co-regulator of transcription. Especially, dTRIM24 acts as a chemical probe of an emerging cancer dependency. Recruitment of the VHL E3 ubiquitin ligase by dTRIM24 elicits potent and selective degradation of TRIM24. TRIM24 has been posited as a dependency in numerous cancers, yet potent and selective ligands for the TRIM24 bromodomain do not exert effective anti-proliferative responses. 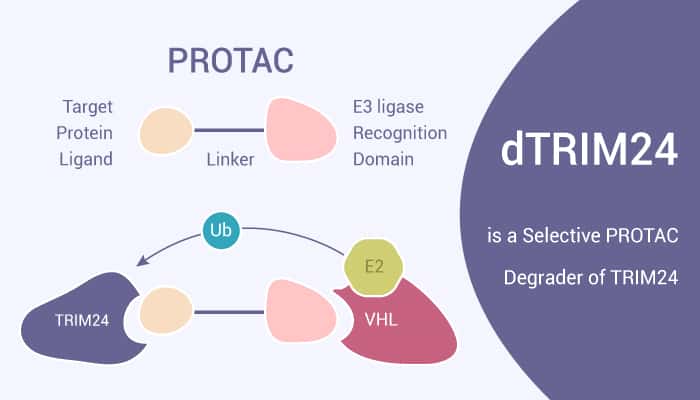 Recruitment of the VHL E3 ubiquitin ligase by dTRIM24 elicits potent and selective degradation of TRIM24. Using dTRIM24 to probe TRIM24 function, researchers characterize the dynamic genome-wide consequences of TRIM24 loss on chromatin localization and gene control. dTRIM24 acts as a chemical probe of an emerging cancer dependency, and establish a path forward for numerous selective yet ineffectual ligands for proteins of therapeutic interest. In this study, researchers present dTRIM24, a selective bifunctional degrader of TRIM24. Mechanistically, the treatment with dTRIM24 consequently exerts a pronounced effect on genome-wide transcription at TRIM24 target genes.

dTRIM24 treatment causes dose- and time-dependent degradation of TRIM24. Moreover, dTRIM24 suppresses growth to a greater extent than does IACS-9571 and enhances PARP cleavage by measuring apoptosis. Furthermore, dTRIM24 treatment causes a pronounced decrease in TRIM24 chromatin association. In particular, dTRIM24 induces rapid and sustained proteasomal degradation of TRIM24. In addition, dTRIM24 selectively degrades TRIM24 across the proteome, which is dependent on binding to both the bromodomain of TRIM24 as well as VHL.

All in all, dTRIM24 would be a chemical probe useful for the thorough mechanism of TRIM24 in human biology.

GSK3368715 is an Orally Active Type I PRMT Inhibitor

NRX-252262, an Enhancer of β-catenin:β-TrCP Interaction