Survivin is the smallest member of the inhibitor of apoptosis (IAP) protein family. Specifically, survivin is a 142 amino acid, 16.5 kDa protein. Survivin participates in the inhibition of apoptosis and the regulation of the cell cycle. Besides, survivin can inhibit caspase and block cell death. Moreover, survivin was highly expressed in the G2/M phase. And it rapidly decreased in the G1 phase of the cell cycle. Heat shock protein 90 (Hsp90) can maintain the stability and folding of various bioenergetic effectors of survivin. The increase of survivin level can effectively inhibit cell apoptosis, so the overexpression of survivin has an effect on the abnormal proliferation of various cancer cells. Furthermore, survivin may also be relevant to the process of cell injury, including transfection. Survivin expression has related to p53 expression.

Meanwhile, survivin gene expression was transcriptionally suppressed by wild-type p53. And it can be deregulated in cancer through a variety of mechanisms.  These include gene amplification, hypomethylation, increased promoter activity, and loss of p53 function. Nonetheless, the polymorphism of the survivin gene is becoming a powerful tool for studying disease biology and has the potential for the prognosis and diagnosis of disease. Today, we will introduce a survivin inhibitor, FL118.

FL118, a Camptothecin Analogue, is a Survivin Inhibitor with Anti-Cancer Activity. 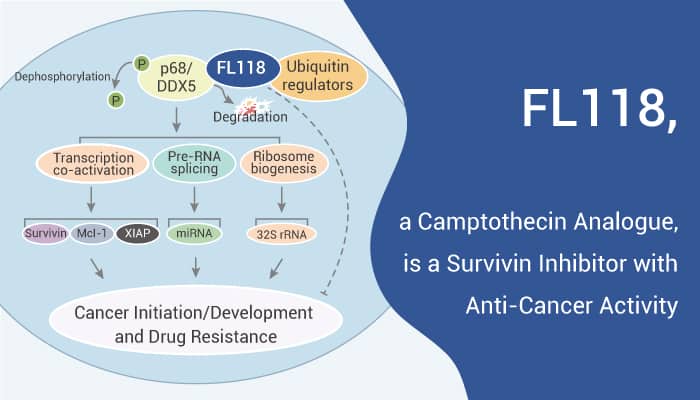 At first, FL118 is a survivin inhibitor and a camptothecin analogue. FL118 binds to oncoprotein DDX5 (p68) to dephosphorylate and degrade DDX5. Obviously, FL118 has the potential for the research of cancer.

Finally, FL118 is a survivin inhibitor and a camptothecin analogue.