Three members of the RAF family, A-Raf, B-Raf, and C-Raf (Raf-1), bind to RAS as the upstream activator and mediate MAPK signaling, binding and mediating MAPK signaling to MEK. Among them, the B-Raf protein participates in sending signals within the cell and directing cell growth. C-Raf or even Raf-1 is a human-derived RAF1 gene that encodes an enzyme and the C-Raf protein acts as a MAP kinase (MAP3K) that is part of the ERK1/2 pathway. At the same time, it functions downstream of the Ras subfamily of membrane-associated GTPases.

GNE-9815 is a highly selective pan-RAF inhibitor that can be used to research KRAS mutant cancers. 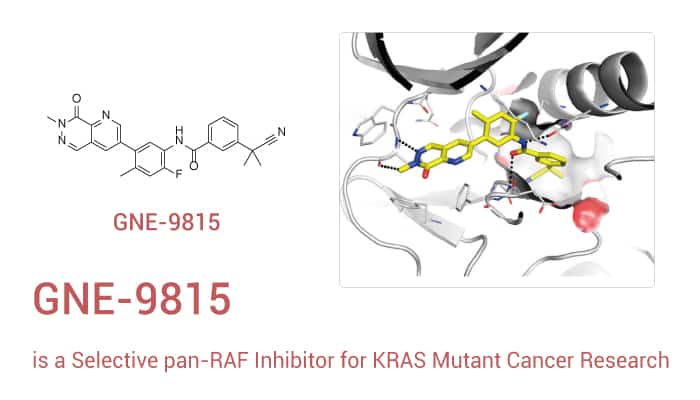 GNE-9815 is a highly selective, pan-RAF inhibitor with good oral bioavailability. It exhibits Ki values of 0.062 nM and 0.19 nM for CRAF and BRAF, respectively. Moreover, GNE-9815 shows synergistic activity in KRAS mutant A549 and HCT116 cancer cells in combination with the MEK inhibitor Cobimetinib. In an HCT116 xenograft mice model, GNE-9815 (15 mg/kg, p.o., single) can result in pathway inhibition as demonstrated by partial inhibition of pRSK between 2 and 24 h. However, it inhibits the downstream MAPK target genes DUSP6 and SPRY4 more robustly, albeit transiently.

When combined with Cobimetinib, it results in deeper inhibition of the downstream MAPK target genes DUSP6 and SPRY4, with a maximum inhibition at 8 hours after the final dose and a more modest rebound at 24-hour levels. In addition, GNE-9815 (5 mg/kg, p.o., single) shows good oral bioavailability. Also, it (1 mg/kg, i.v., single) exhibits low blood clearance, a moderate volume of distribution, and a short half-life in female NCR nude mice.

In conclusion, GNE-9815 is a highly selective, pan-RAF inhibitor with good oral bioavailability for cancer research.

MSN-125 is a Potent Bax and Bak Oligomerization Inhibitor