NIMA-related kinase 2 (Nek2) is a homodimeric serine/threonine kinase. It localizes to centrosomes, the microtubule organizing centers of the cell. At the onset of mitosis, Nek2 phosphorylates the inter-centrosome linker proteins, C-Nap1, and rootletin. Nek2 plays a role in bipolar spindle assembly driven by the microtubule motor protein, Eg5. The lack of cell-active Nek2 inhibitors has hindered attempts to elucidate its kinase activity-dependent functions. Like many protein kinases with roles in mitosis, Nek2 has a relation with cancer. Knockdown of Nek2 inhibited the proliferation of cholangiocarcinoma and breast cancer cell lines in tissue culture and in mouse tumor xenografts while having no effect on normal fibroblasts. Nek2 knockdown also abrogates the ability of oncogenic H-Ras(G12V) to induce centrosome amplification. In this study, JH295 is a potent, irreversible, and selective Nek2 inhibitor with an IC50 of 770 nM. JH295 inhibits cellular Nek2 via alkylation of Cys22. 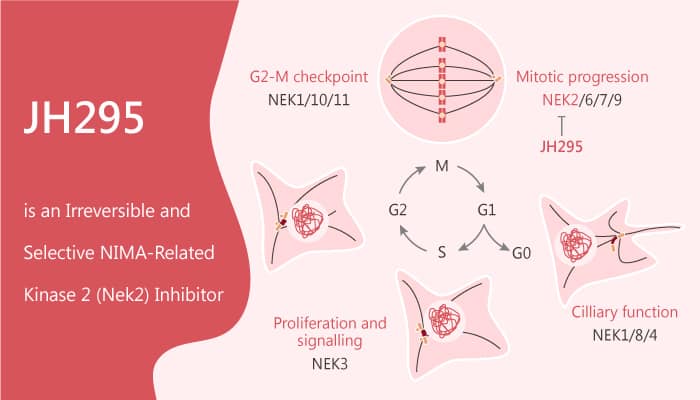 JH295 irreversibly inhibits cellular Nek2 without affecting the mitotic kinases, Cdk1, Aurora B, or Plk1. It inhibits WT Nek2 in cells with an IC50 of ~1.3 μM, whereas it has little effect on the C22V mutant. The inhibition of cellular Nek2 by JH295 occurs via alkylation of Cys22 and is not an indirect effect of inhibiting kinases that regulate Nek2. In addition, JH295 does not significantly inhibit cellular kinases required for SAC maintenance, such as AurB or Mps1. Meanwhile, JH295 does not perturb bipolar spindle assembly or chromosome congression.