DDB1-CUL4-associated protein 16 (DCAF16) is a 216 aa protein that is highly conserved across mammals, but absent from rodents. The DCAF16 protein has eight cysteine residues, including a cluster of four cysteines between amino acids 173-179. Especially, DCAF16 is a substrate recognition component of CUL4-DDB1 E3 ubiquitin ligases. DCAF16 acts as a target of electrophilic PROTACs that promote the nuclear-restricted degradation of proteins.

DCAF16 acts as the KB02 compound-binding factor. KB02-JQ1 is a bifunctional PROTAC consists of KB02 and JQ1. JQ1 is a highly potent, and selective bromodomain-containing protein 4 (BRD4) inhibitor.KB02-JQ1 induces the destruction of BRD4, but not its close family members BRD2 and BRD3. KB02-JQ1 promotes the degradation of BRD4 in HEK293T cells in a concentration-dependent manner,

All in all, ligand-dependent protein degradation has emerged as a compelling strategy to pharmacologically control the protein content of cells. KB02-JQ1 is an electrophilic PROTAC that degrades nuclear proteins by engaging DCAF16. 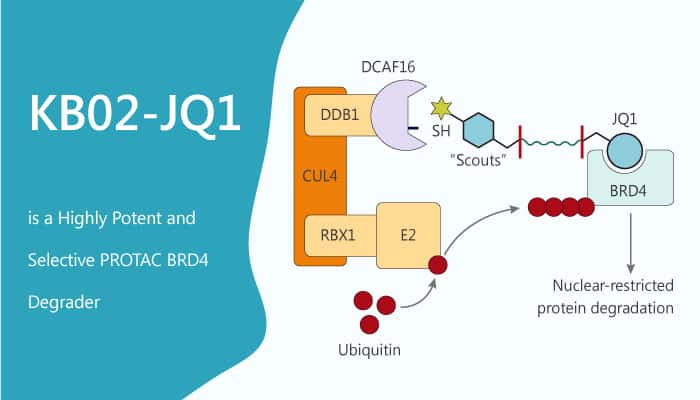 IDH889 is an Orally Available and Mutant Specific IDH1 Inhibitor