The tumor suppressor protein p53 plays a pivotal role in several critical cellular processes, including cell-cycle regulation, DNA repair, and apoptosis. Besides, it exerts its tumor suppressor function through complex and intricate regulatory processes mediated by its association with a wide range of cellular effectors.

Why P53 could become a hot spot in tumor research? In fact, most tumors display impaired or abrogated p53 signaling. p53 is inactivated directly by a mutation in about 50% of all cancers, This makes the p53 pathway a prime target for anticancer drug development.

The mutation of p53 always appears in its DNA-binding domain (DBD), which affects its DNA binding and/or thermodynamic stability. The oncogenic Y220C mutant is the ninth most frequent p53 missense mutant in cancer. And it shows a particularly suitable test case for stabilizers development.

In this article, we will introduce a stabilizer of oncogenic p53 mutation Y220C, MB710. 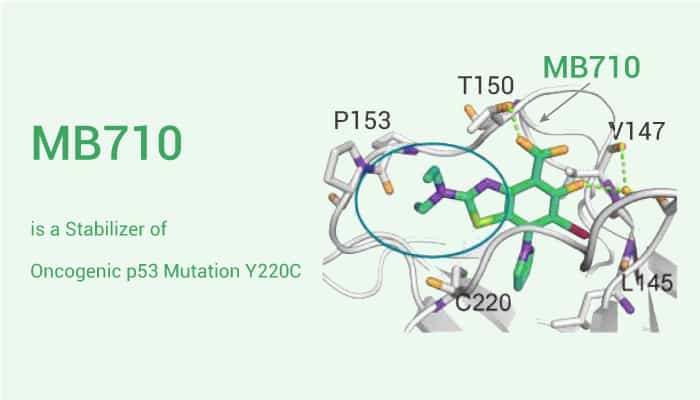 In summary, in this article, we introduce a novel small molecule aimed at stabilizing the folded form of the p53 cancer mutant Y220C. MB710 exhibits a high affinity with a Kd of 4 μM. What’s more, MB710 induces selective viability reduction in cancer cell lines containing the oncogenic p53-Y220C mutation. But it is well tolerated in other cell lines.

JNJ-9350 is an inhibitor of Spermine Oxidase (SMOX)