Mutant KRAS is an attractive drug target for the treatment of a number of cancers for many decades. Until recently, the high affinity of KRAS for GDP/GTP and the lack of any other apparent binding pocket have significantly hampered the development of KRAS inhibitors. KRAS inhibitor relies on a reactive warhead forming a stable covalent bond with the mutant Cys12. KRASG12Dis the most common mutation (33%) among KRAS mutant tumors. It lacks a reactive residue adjacent to the switch II pocket as evidenced in recent attempts. Therefore, there requires a novel approach toward the identification of selective inhibitors. In this study, MRTX1133 is a potent, selective, noncovalent KRASG12D inhibitor. It has picomolar binding affinity, single-digit nanomolar activity in cellular assays. In addition, it has significant in vivo efficacy in tumor models harboring KRASG12D mutations. 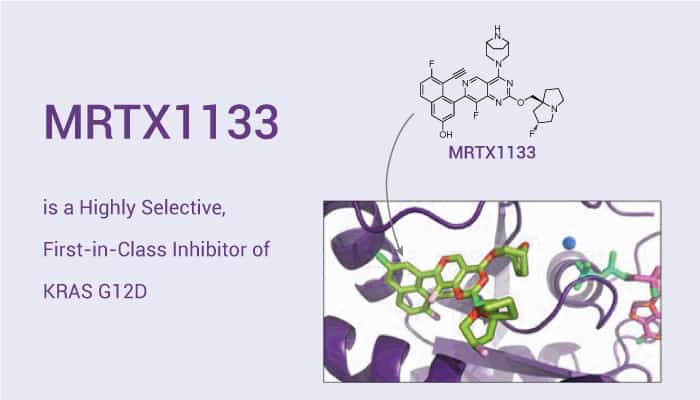 MRTX1133 is a noncovalent, potent, and selective KRAS G12D inhibitor.

MRTX1133 is an exceptionally potent and selective KRASG12D inhibitor. It optimally fills the switch II pocket and extends three substituents to favorably interact with the protein. The KD is 0.2 pM. MRTX1133 inhibits ERK phosphorylation in the AGS cell line with an IC50 of 2 nM. In a 2D viability assay, the IC50 of MRTX1133 is 6 nM against the same cell line. It shows more than 500-fold selectivity against MKN1, a cell line that is dependent on KRAS for its growth and survival due to the amplification of wild-type KRAS.  In addition, MRTX1133 (3-30 mg/kg) shows dose-dependent antitumor activity. However, there is no significant antitumor activity in the non-KRASG12D tumor model MKN1.

WAY 316606 is an Inhibitor of the Secreted Protein sFRP-1

dBET57 is a Selective PROTAC Degrader of BRD4