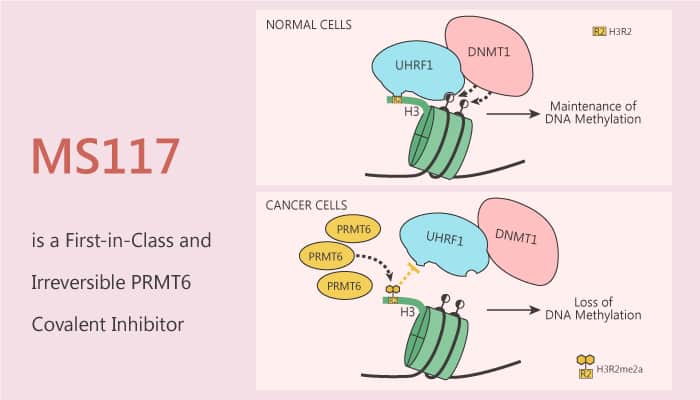 MS117 potently and concentration-dependently reduces cellular levels of H3R2 asymmetric dimethylation (H3R2me2a, IC50=1.3 μM). Furthermore, MS117 treatment results in a concentration-dependent inhibition of H4R3me2a levels with an IC50 value of 5.6 μM, indicating that the compound is less potent at inhibiting PRMT1 than PRMT6 in cells. MS117 (at concentrations up to 20 μM for 3 days) is not cytotoxic in MCF-7, PNT2, and HEK293T cells. Besides, MS117 is a valuable chemical tool without significant cell toxicity. In cellular assays, MS117 potently inhibits PRMT6, is less potent against PRMT1 and inactive against PRMT3 and PRMT4, and is not cytotoxic in general.

Collectively, MS117 is a first-in-class PRMT6 covalent inhibitor and a valuable tool compound for the biomedical community to investigate PRMT6 biological functions and disease associations.

IDH889 is an Orally Available and Mutant Specific IDH1 Inhibitor