Protein-protein interactions (PPIs) play a key role in nearly every biological function. And PPIs are a promising new class of biological targets for therapeutic intervention. In addition, PPIs governing the recognition of substrates by E3 ubiquitin ligases are critical to cellular function. Using PPI enhancer molecules as a “molecular glue” to enhance the substrate: ligase interaction may be a useful way.

These small molecule enhancers bind both the substrate (either native-substrate or neo-substrate) and the ligase without the need for a linker to induce substrate degradation. However, β-catenin, the Wnt signaling effector protein, is often dysregulated and stabilized in cancer. β-catenin phosphorylation mutations, including Ser33 and Ser37, impair β-catenin’s ability to effectively bind β-TrCP, thereby promoting an enhanced oncogenic transcription program. Therefore, using the mechanism of molecular glue, a small molecule β-catenin degrading agent is designed, which works by restoring the binding of mutant β-catenin and β-TrCP.

NRX-2663, where phenoxy substitution at the 4-position of the trifluoromethyl pyridone core induces rearrangement of β-catenin Leu31 to create a larger binding pocket. More importantly, NRX-2663 is a potent enhancer of the interaction between β-catenin, and its cognate E3 ligase, SCFβ-TrCP. Similarly, this compound enhances the binding of β-catenin peptide for β-TrCP. Furthermore, NRX-2663 improves the pSer33/Ser37 β-catenin of binding. In addition, it also significantly enhances the ubiquitylation of the pSer33/Ser37 β-catenin peptide. Apart from this, NRX-2663 also induces the degradation of an engineered mutant β-Catenin in a cellular system. 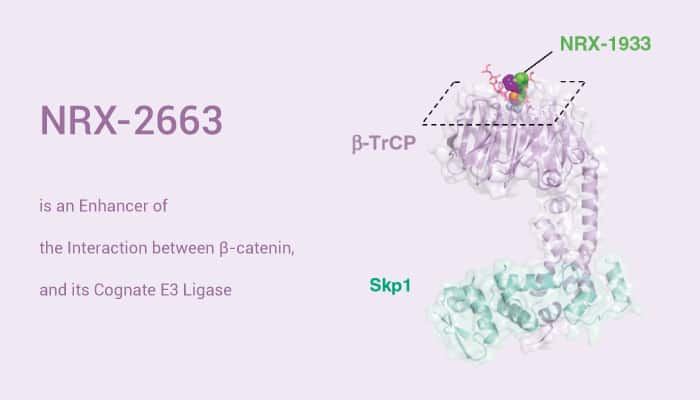 To sum up, NRX-2663 is a potent enhancer of the interaction between β-catenin and SCFβ-TrCP.