Cyclin-dependent kinases (CDK) are a family of protein serine/threonine kinases whose activity depends on association with a noncatalytic regulatory subunit called a cyclin. It plays a crucial role in the control of the cell cycle. Aberrations in the control of cell cycle progression occur in the majority of human malignancies. Hence, CDKs are promising targets for anticancer therapy. Various specific CDK2 inhibitors have shown to be effective in inducing apoptosis and reducing proliferation of various cancer cells. The properties of CDK2 inhibitors to affect cell cycles are however not completely understood. 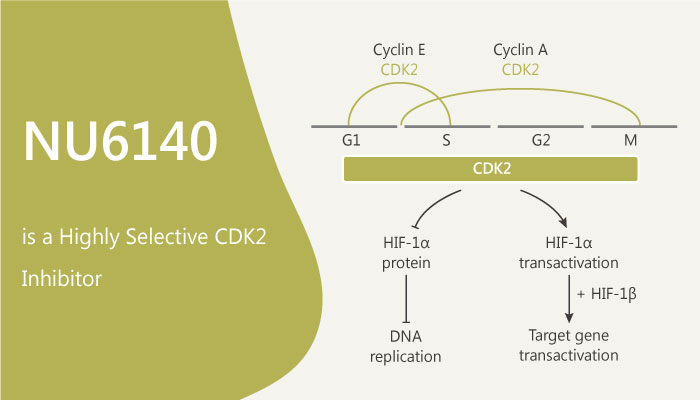 Among CDK2 inhibitors, those with purine-based structures (NU6140 and its derivatives) have shown higher specificity to inhibit CDK2 interaction. It is a selective CDK2-cyclin A inhibitor (IC50, 0.41 μM) and exhibits 10- to 36-fold selectivity over other CDKs. NU6140 also potently inhibits Aurora A and Aurora B, with IC50s of 67 and 35 nM, respectively. NU6140 induces apoptosis in HeLa cervical carcinoma cells, arrests cells in the G2/M phase, and reduces cell survival both by itself and in combination with paclitaxel.

Kallas et al found that both hES and hEC cells responded to NU6140 treatment by induced apoptosis and a decreased expression of NANOG, OCT4, and SOX2 in surviving cells. A higher sensitivity to NU6140 application in hES than hEC cells was detected. NU6140 treatment arrested hES and hEC cells in the G2 phase and inhibited entry into the M phase. Pennati et al found that NU6140 significantly potentiates the apoptotic effect of paclitaxel, with inhibition of survivin expression/phosphorylation as the potential mechanism.

Embelin is a Nonpeptidic XIAP Inhibitor