There are 18 human HDACs in four classes. Class I HDACs include HDAC1, -2, -3, and -8. And class II HDACs include two subgroups: class IIa and class IIb. Class IIa includes HDAC4, -5, -7, and -9, and class IIb includes HDAC6 and -10. Class III, also known as the sirtuins (SIRTs), includes SIRT1-7, and class IV contains only HDAC11. Importantly, Class I and II HDACs are general oncoproteins that interact with substrates and regulate gene expression to promote tumorigenesis and cancer development either individually or alongside co-repressors. Paradoxically, SIRTs can serve as both oncoproteins and tumor suppressors. In the 1970s, researchers found that sodium butyrate can transform red leukemia cells into normal cells, and resynthesize hemoglobin. This process was accompanied by strong histone hyperacetylation and resulted in the discovery of the first HDACi.

Panobinostat (LBH589) is a potent and orally active pan-HDAC inhibitor. 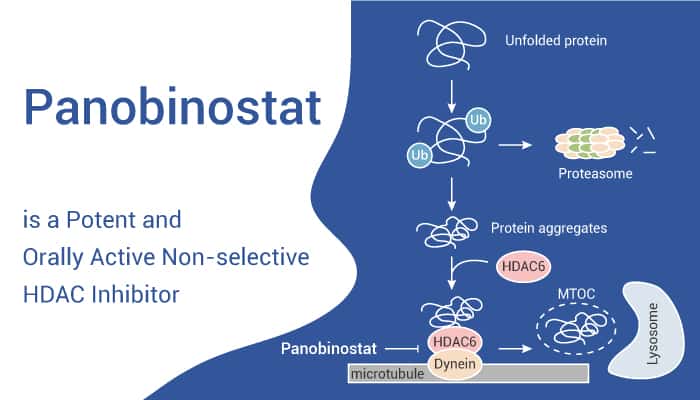 All in all, Panobinostat is a potent and orally active non-selective HDAC inhibitor, with antineoplastic activities.

BAY1238097 is a Selective Inhibitor of BET Binding to Histones