Clathrin is a protein that plays a major role in the formation of coated vesicles. It forms a triskelion shape composed of three clathrin heavy chains and three light chains. Clathrin can interact with multiple adapter proteins like amphiphysin via its N-terminal β-propeller domain. In addition, Clathrin is best known for its roles in endocytosis and TGN/ endo-lysosmal sorting. For clathrin-mediated endocytosis (CME), clathrin cycles between the cytoplasmic triskelion and a polymerised coat on vesicles or membranes. During mitosis, clathrin localizes to the mitotic spindle where it is involved in organizing and stabilizing spindle microtubules. Meanwhile, the role of clathrin at the mitotic spindle is dependent on both its N-terminal β-propeller domain and ability to trimerise as well as its interaction with TACC3. 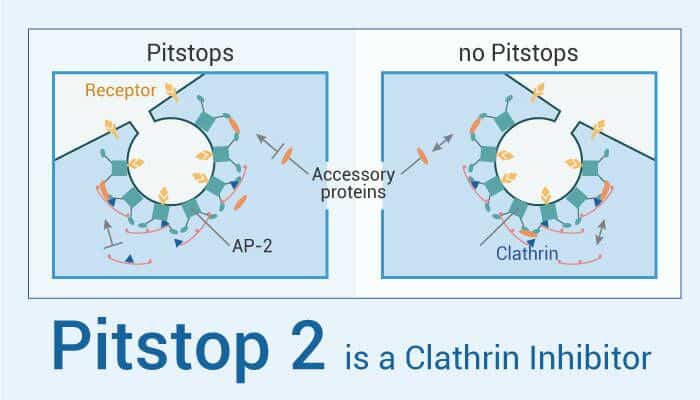 Pitstop 2 is a selective clathrin inhibitor, which targets the N-terminal β-propeller domain. This compound inhibits clathrin-mediated endocytosis (CME) by associating with the terminal domain of clathrin. In addition, Pitstop 2 is a potent inhibitor of transferrin uptake in cells and is reversible. Moreover, Pitstop 2 inhibits clathrin and is anti-proliferative and cytotoxic in a dividing cancer cell, but not in a dividing non-cancer cell. Therefore, Pitstop 2 has the potential for anti-cancer research. For example, Pitstop 2 traps HeLa cells in metaphase through loss of mitotic spindle integrity and activation of the spindle assembly checkpoint, phenotypic clathrin depletion, and Aurora A kinase inhibition. Pitstop 2 inhibits cell proliferation and induced cell death exclusively in dividing cancer cells. Thus, Pitstop 2 possesses anti-mitotic and anti-cancer properties. Furthermore, Pitstop 2 also inhibits platelet activation, platelet aggregation, and secretion.

To sum up, Pitstop 2 is a clathrin inhibitor that inhibits CME by associating with the terminal domain of clathrin.

TK4g is a JAK Inhibitor for Leukemia Cancer Research

XL092 is a Potent Axl, Mer and C-Met kinase Inhibitor