The signal transducer and activator of transcription (STAT) belong to a group of latent cytoplasmic transcription factors that play a central role in transmitting signals from the cytoplasmic membrane to the nucleus. There are seven members of the STAT family: STAT1, STAT2, STAT3, STAT4, STAT5A, STAT5B, and STAT6. STAT regulates many aspects of growth, survival, and differentiation in cells. Specifically, STAT plays an important role in the development and function of the immune system and in maintaining immune tolerance and tumor surveillance.

The signal transducer and activator of transcription 6 (STAT6) play a fundamentally important role in immune cells’ cellular function. Earlier studies have revealed STAT6 as an important target of interleukin (IL)-4 in nonmuscle cells. After IL-4 stimulation, STAT6 gets activated by phosphorylation and functions as a transcription factor to promote context-dependent gene expression. Importantly, STAT6 plays an important role in T cell proliferation. Also, its activation prevents apoptotic cell death in B cells. It is also involved in the fusion of macrophages to generate multinucleated giant cells in response to inflammation. Recent studies have also demonstrated the involvement of STAT6 in microglial activation in the brain tissue. 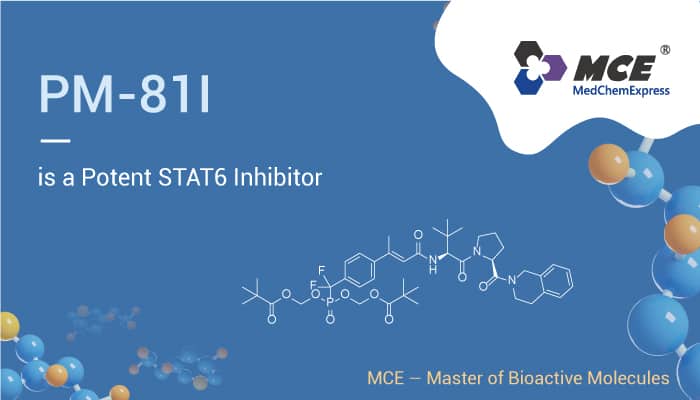 PM-81I is a novel and potent STAT6 inhibitor. And it targets the SH2 structural domain. PM-81I can effectively inhibit IL-4 stimulated phosphorylation of STAT6 in Bease-2B immortalized human epithelial airway cells. Meanwhile, PM-81I did not cross-react with STAT5 but did moderately inhibit FAK and STAT1. Importantly, PM-81I has the potential for the research of allergic lung disease, allergic rhinitis, chronic obstructive pulmonary disease, or cancer.

All in all, PM-81I is a potent STAT6 inhibitor that has the potential for the research of inflammation disease or cancer.