Recent research suggests that lysophosphatidylinositol and its 2-arachidonoyl derivative may be the endogenous ligands for GPR55, and the receptor appears likely to be a possible target for treatment of inflammation and pain as with the other cannabinoid receptors. Recent studies show that the lysophosphatidylinositol/GPR55 system have some connection with obesity in humans. Thus, GPR55 is a new potential drug target for the treatment of diabetes, Parkinson’s disease, neuropathic pain, and cancer. 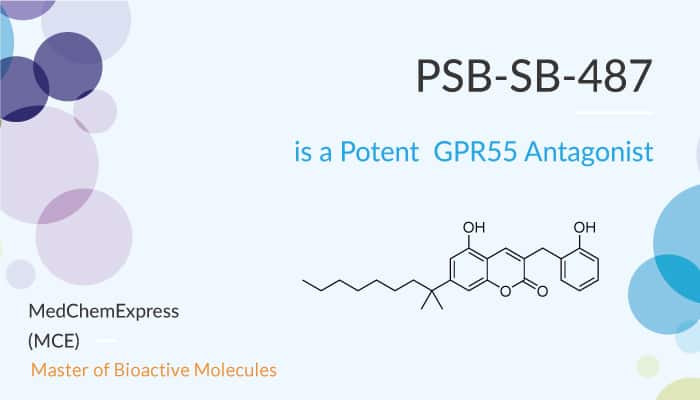 PSB-SB-487, a 7-unsubstituted Coumarin, is a potent antagonist for the orphan G-protein-coupled receptor GPR55. Meanwhile, PSB-SB-487 has poorer selectivity over other related receptors, acting as a weak antagonist at CB1 with a Ki of 1170 nM, and a partial agonist at CB2 with a Ki of 292 nM. However, this compound shows weak antagonistic properties at GPR18. In addition, PSB-SB-487 with branched aliphatic residues displays considerable concentration-dependent inhibition of lysophosphatidylinositol’s maximal reponse. PSB-SB-487 has the potential for the research of diabetes, Parkinson’s disease, neuropathic pain, and cancer.

To summarize, PSB-SB-487, a Coumarin derivative, is a potent GPR55 antagonist.

PI-828 is a Dual PI3K and Casein Kinase 2 Inhibitor