Poly (ADP-ribose) polymerase (PARP), a family of proteins, is involved in various cellular processes such as DNA repair and programmed cell death. PARP presents in the cell nucleus. It consists of a DNA-binding domain, a caspase-cleaved domain, an auto-modification domain, and a catalytic domain. In particular, the protein can detect and initiate an immediate cellular response to metabolic, chemical, or radiation-induced single-strand DNA breaks (SSB). Once PARP detects SSB, it will bind to the DNA, and begins to synthesize a signal for DNA-repairing enzymes. PARP plays an important role in cell proliferation, thus, PARP inhibitors have been used for researching anticancer. 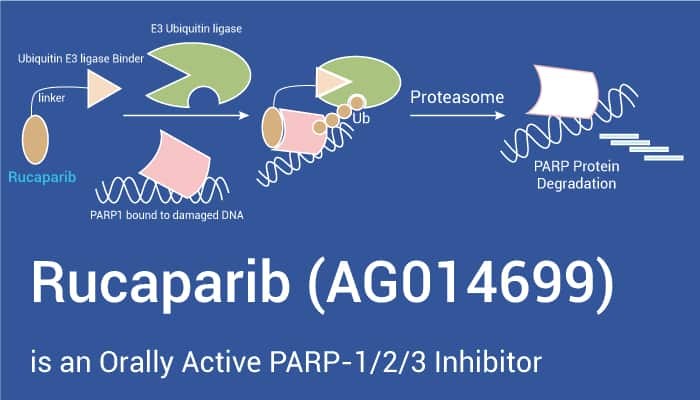 Rucaparib inhibits MDA-MB-468, MDA-MB-231, and Cal-51 with IC50s of 9.7 μM, 13 μM, and 8.6 μM. This agent (0-10 μM) induces γ-H2AX formation and PARP cleavage in a dose-dependent manner indicative of DNA damage and apoptosis in these cancer cell lines. Besides, it also decreases the phosphorylation levels of Stat3 and dose-dependently increases the phosphorylation levels of Akt.

In addition, in Capan-1 tumor-bearing mice, Rucaparib (10 mg/kg; IP, daily for 5 days per week, for 6 weeks) significantly inhibits the growth of the tumor. Even though it is cleared from the plasma, Rucaparib is also retained in tumor xenografts. Moreover, the inhibition of PARP activity in tumor xenografts continues for 1 week after a single injection.