Cyclin-dependent kinases (CDKs) are serine/threonine kinases whose activity depends on a regulatory subunit-a cyclin. Based on the sequence of the kinase domain, CDKs belong to the CMGC group of kinases, along with MAPKs, Gsk3β, DYRK family and CDK-like kinases. There are around 20 Cyclin-dependent kinases (CDK1-20) known till date. CDK1, 4 and 5 paly an important role in cell cycle, and CDK 7, 8, 9 and 11 take part in transcription. CDKs play important roles in the control of cell division and modulate transcription in response to several extra- and intracellular cues.

It is abundantly clear that the CDK family is central to multiple signaling pathways controlling transcription and cell-cycle progression. As a consequence of their importance in multiple processes, CDKs are frequently mutated or deregulated in disease. A classic example is the almost universal deregulation of the CDK-cyclin-Rb pathway in cell-cycle entry during malignant transformation. Hence, CDK family is an important target for cancer or other diseases. 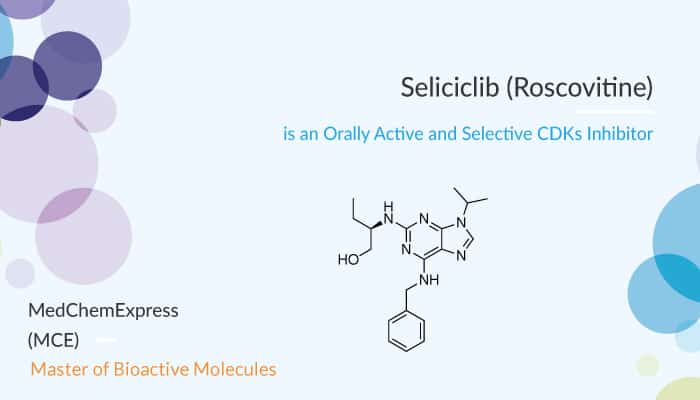 All in all, Seliciclib, a potent, selective and orally active CDKs inhibitor, preferentially inhibits CDK2, CDK7 and CDK9.