The goal of PROTAC technology is to create a chimeric molecule that bridges any cancer-causing protein to an E3 ligase. In particular, PROTACs consist of one moiet, which is recognized by the E3 ligase. To date, efforts have largely focused on recruitment of the von Hippel-Lindau (VHL) and cereblon (CRBN) E3 ubiquitin ligases. This is because the discovery of high-affinity ligands for these two ligases. Fortunately, researchers generate isoform-selective PROTACs for the p38 MAPK family using a single warhead (foretinib) and recruited E3 ligase (von Hippel-Lindau). As a result, based on their distinct linker attachments and lengths, these two PROTACs differentially recruit VHL, resulting in degradation of p38α or p38δ. 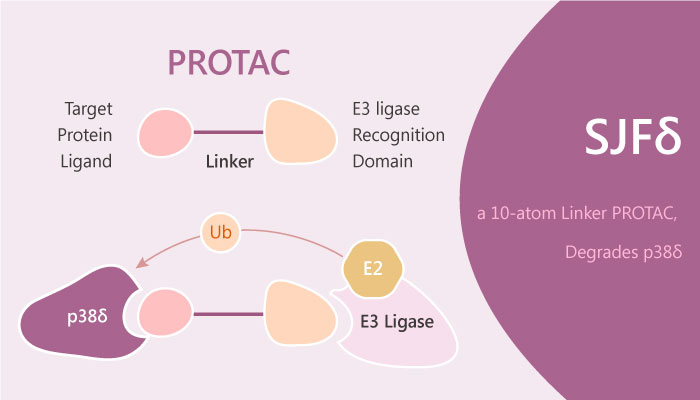 In this syudy, Blake E. Smith, et al discovered that the 10-atom linker PROTAC SJFδ. Moreover, they characterized the role of ternary complex formation in driving selectivity, showing that it is necessary for PROTAC-induced substrate ubiquitination. Besides, Blake E. Smith, et al also explored the p38δ:PROTAC:VHL complex to explain the different selectivity profiles of these PROTACs. Gratifyingly, SJFδ degrades p38δwith strong capacity. SJFδ degrades p38δ with a DC50 of 46.17±9.85 nM and a Dmax of 99.41±3.31%.