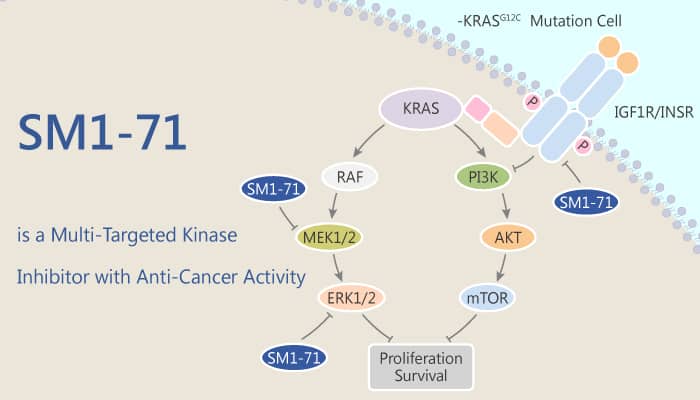 Additionally, SM1-71 has an acrylamide warhead in the ortho-position. At the same time, it exhibits off-target binding towards kinases other than TAK1 with a DFG-1 cysteine. This means it may be a multi-targeted probe to interrogate the cellular kinome.

Firstly, In order to distinguish covalent from reversibly bound targets, the authors chose SM1-71-R as a control compound. In a biochemical assay, SM1-71-R is a weaker inhibitor of kinases that previously demonstrated irreversible inhibition by SM1-71. SM1-71 shows 6 to 67-fold stronger inhibition on kinases such as GAK, MAP2K1, MAP2K2, MAPK1, LIMK1, and SRC than SM1-71-R. However, both SM1-71 and SM1-71-R show similar inhibition on reversibly bound kinases such as AURKA, PTK2 (FAK), TEC, IGF1R, and MET.

In conclusion, SM1-71, as a multitargeted kinase inhibitor, it has the potential to be a useful tool to discover kinase dependencies in cancer.

BT5528 is a Bicyclic Peptide Toxin Conjugate, an EphA2 Activator.