The bivalent small molecules that enable to induce proteasome-mediated degradation of ALK is on the way. In this article, we will present an example of ALK PTOTAC degrader, TL13-112. 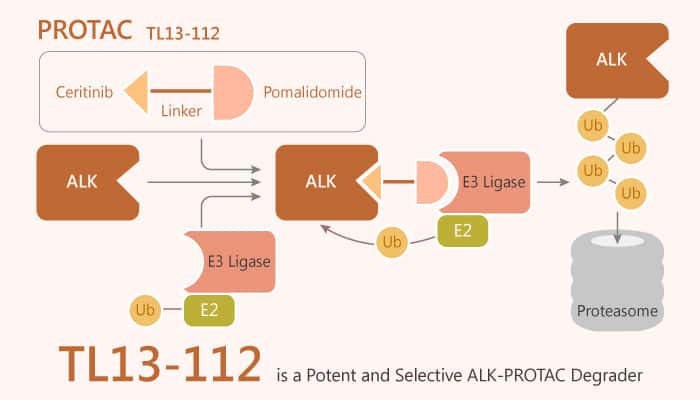 TL13-112 also has the potential ability to overcome resistance mutation in Ba/F3 cells expressing EML4-ALK with the resistant mutations L1196M, C1156Y, or G1202R. This degrader shows a drop in anti-proliferative activity similar to the behavior of the parental ALK inhibitors. These results indicate that ALK targeting degraders based on ALK inhibitors enable to overcome resistance mutations and may show improved pharmacodynamic properties in these resistant mutant cell lines.
In conclusion, TL13-112 is a promising ALK degrader that performs good efficacy, we should attract more attention to its function in future investigation.

Retro-2 is a Selective Inhibitor of Retrograde Protein Trafficking

PU-H54, a Grp94-selective Inhibitor, Can be Used for Breast Cancer Research