Caspase is a family of cysteine proteases that play essential roles in apoptosis (programmed cell death), necrosis, and inflammation. They are named caspases due to their specific cysteine protease activity-a cysteine in its active site nucleophilically attacks and cleaves a target protein only after an aspartic acid residue. There are two types of apoptotic caspases: initiator (apical) caspases and effector (executioner) caspases. Caspases also have a role in inflammation, whereby it directly processes pro-inflammatory cytokines such as pro-IL1β. Caspases also play a role in cell proliferation, tumor inhibition, cell differentiation, neurodevelopment and aging.

Z-VAD-FMK (also known as Z-VAD(OH)-FMK) is a well-known cell-permeant pan-caspase inhibitor. In particular, Z-VAD-FMK irreversibly binds to the catalytic site of caspase proteases, which can prevent apoptosis in many different cell types. Previously, Yu et al. demonstrated that Z-VAD-FMK induces autophagy in monocytes and macrophages. Z-VAD-FMK is widely used both in vitro and in vivo to block the release of cytokines and the initiation of apoptosis. For example, Z-VAD-FMK induces autophagy and necrotic cell death in J774A.1 and RAW264.7 macrophages and in IFN-γ primed primary mouse peritoneal macrophages, but not in vascular smooth muscle cells or C2C12 myoblasts. In addition, this compound is also a potent yeast and mammalian peptide: N-glycanase (PNGase) inhibitor. PNGase selectively removes N-glycans from misfolded glycoproteins prior to ubiquitination and proteasomal degradation. And Z-VAD-FMK reacts with PNGase in a manner strictly analogous to its modification of caspases. 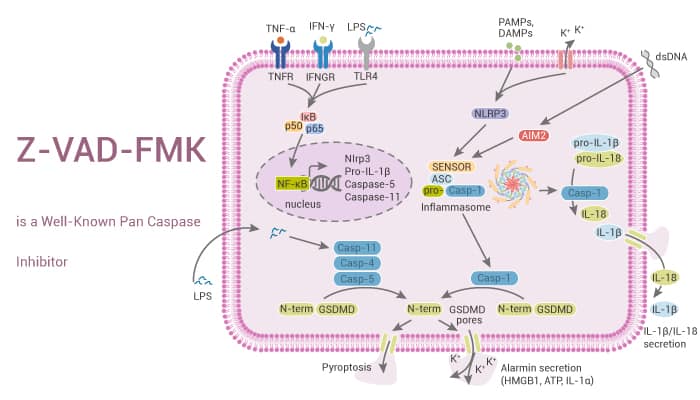 To sum up, Z-VAD-FMK is a cell-permeant, irreversible pan-caspase inhibitor, which prevents apoptosis in many different cell types.

PF-573228 is a Potent and Selective FAK Inhibitor