DNA methyltransferase (DNMT) family enzymes catalyze the transfer of methyl to DNA. Specifically, DNMT is a conserved cytosine methylase family, which plays a key role in epigenetic regulation. The DNMT family has four members, including DNMT1, Dnmt3a, DNMT3b, and DNMT3l. Different from other DNMTs, DNMT3l does not have any inherent enzyme activity. Besides, DNMT plays an important role in genome integrity, and its destruction may lead to chromosome instability and tumor progression. Moreover, DNMTs are for transcriptional silencing of many sequence classes.

Furthermore, DNMT1 is a large protein containing 1616 amino acids (AA), which mainly catalyzes DNA methylation and genetic activity. DNMT2, the smallest mammalian DNMT, is considered to be involved in the recognition of DNA damage, DNA recombination, and mutation repair. Meanwhile, De novo DNA methylation activity catalyzed by Dnmt3a and DNMT3b is essential during embryonic development or gametogenesis. Therefore, DNMTs may be used as anticancer targets. Nonetheless, inhibition of DNMT is relevant to decreased tumorigenicity and increased expression of tumor suppressor genes. Here, we will introduce a DNA methyltransferase inhibitor, Zebularine.

Zebularine is a DNA Methyltransferase Inhibitor. 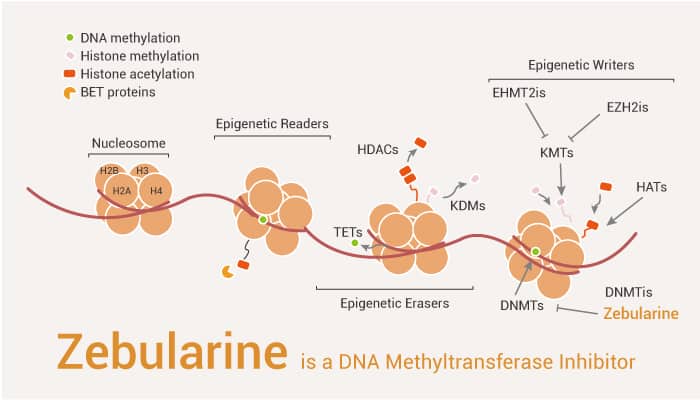 First of all, Zebularine inhibits cytidine deaminase with a Ki of 0.95 μM. Interestingly, Zebularine exerts its demethylation activity by stabilizing the binding of DNMT to DNA, hindering methylation and reducing dissociation. Thus, it can capture the enzyme and prevent conversion at other sites. Zebularine can enhance the chemosensitivity and radiosensitivity of tumor cells. Importantly, Zebularine has antimitotic and vascular inhibitory activities.

Last but not the least, the tumor volume of Zebularine-treated mice was statistically significantly reduced. Additionally, Zebularine can also prolong the survival time of L1210 leukemia mice treated with 5-Aza-CdR.

All in all, Zebularine is a DNA methyltransferase inhibitor.

TK4g is a JAK Inhibitor for Leukemia Cancer Research

SHR2415 is a Selective and Orally Active ERK1/2 Inhibitor