Cervical cancer is one of the most common cancers among women worldwide. Ro 90-7501 is an inhibitor of the amyloid β42 (Aβ42) fibril assembly. It is associated with Alzheimer’s disease. The usual method for Cervical cancer treatment is Radiotherapy, especially for locally advanced cancer. However, the treatment results are not satisfactory, the development of radiosensitizers is one of the strategies to improve the efficacy of radiotherapy. The present study aimed to elucidate the radiosensitizing effects of Ro 90-7501 and focused on ATM signaling after irradiation. In addition, Ro 90-7501 also inhibits protein phosphatase 5 (PP5) in a TPR-dependent manner. 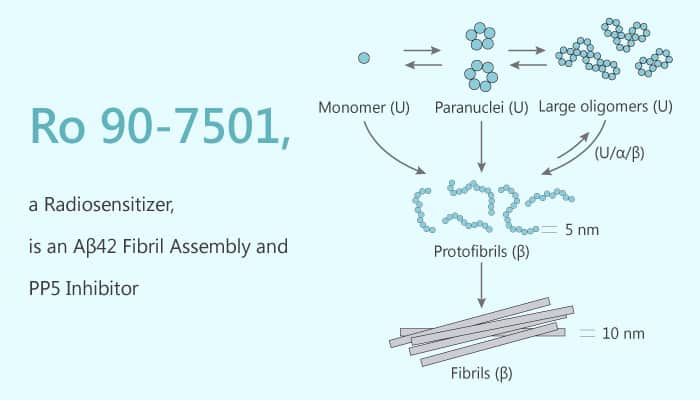 Ro 90-7501 significantly decreases tumor volume in the irradiation group. It has a radiosensitizing effect in vivo as well as in vitro.  Moreover, it induces cell-cycle arrest after irradiation, and it inhibits phosphorylation of ATM and its downstream proteins. In addition, RO 90–7501 is selectively enhancing TLR3 agonist-induced type I IFN production in both human kidney epithelial and macrophage cell lines. In summary, Ro 90-7501 has significant radiosensitizing effects on cervical cancer cells. It inhibits the phosphorylation of ATM and its downstream proteins, suppresses cell cycle progression, and increases apoptosis after irradiation.