Receptor tyrosine kinase-like orphan receptor 1 (ROR1) is an oncofetal protein present on many cancers. ROR1 reappears on hematological cancers and solid tumors, particularly those with high-grade histology. And ROR1 is a cell-surface protein that mediates signaling from its ligand. During embryogenesis, ROR1 has a physiological role in neural, auditory, and skeletal. How
ROR1 binds to Wnt5a, a noncanonical Wnt-signaling member.

Expression of the non-canonical Wnt signaling receptor ROR1 is absent in normal tissues. However, it shows upregulation aberrantly in a range of malignancies.

In this article, we will introduce a ROR-1 antibody, Zilovertamab. 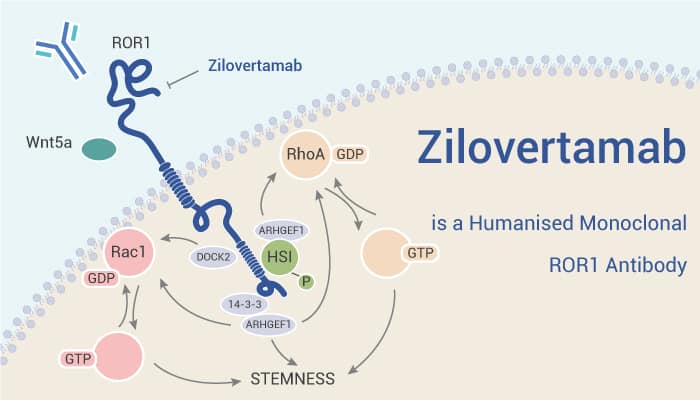 In HGSOC cells, Zilovertamab alone inhibits growth over the 72 h period. Besides, it leads to a significantly reduced cell confluency. Zilovertamab and other chemotherapeutic agents show a synergistic effect in the combination models. Zilovertamab and Olaparib show an additive effect in the platinum-resistant CaOV3CisR cell line.
In ROR1Hi CLL cells, Wnt5a enhances the resistance of CLL cells to Venetoclax at all concentrations. And these effects can be inhibited by Zilovertamab. Additionally,  Wnt5a leads to an upregulation of BCL-XL protein. But Zilovertamab inhibits Wnt 5a-induced BCL-XL upregulation. This shows that Wnt5a can enhance the resistance of ROR1Hi CLL cells to Venetoclax by BCL-XL increase. However, this effect is inhibited by anti-ROR1 mAb, Zilovertamab.

In conclusion, Zilovertamab is a humanized Monoclonal ROR1 antibody for cancer research.

TVB-3166 is an Orally Active and Selective FASN Inhibitor