Peroxisome proliferator-activated receptors (PPARs) are ligand-activated transcription factors that belong to the nuclear hormone receptor superfamily. Of these, PPARα mainly expresses in the liver, where it activates fatty acid catabolism. PPARδ expresses ubiquitously and implicates in fatty acid oxidation and keratinocyte differentiation. PPARγ2 expresses exclusively in adipose tissue and plays a pivotal role in adipocyte differentiation. Thus PPARs are molecular targets for the development of drugs treating metabolic syndrome. In particular, PPARs play a role in the regulation of cancer cell growth. In this study, YaldaBravo, et al described the discovery of NXT629. 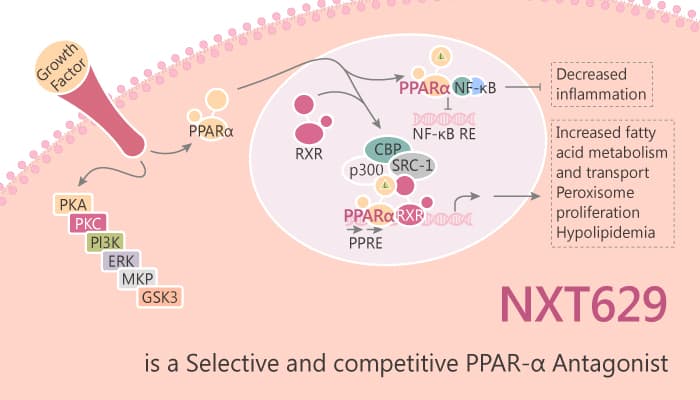 NXT629 is a novel, potent and selective PPARα antagonist. NXT629 inhibits agonist-induced activation of human PPARα with an IC50 of 78 nM. The selectivity for PPARα over PPARβ/δ is 75-fold while that for PPARγ is 200-fold. Furthermore, NXT629 is selective across a panel of other nuclear hormone receptors. NXT629 is less potent on PPARα than in the human reporter system with a calculated IC50 of 2.3 µM. The selectivity of NXT629 in mouse is 4.3-fold over PPARβ/δ and 3.0-fold selective over PPARγ.

NXT629 exerts its effects in vivo via antagonism of PPARα. For instance, NXT629 demonstrates excellent potency, selectivity against other nuclear hormone receptors, and good pharmacokinetics in mouse. NXT629 delays growth of subcutaneous SKOV-3 tumors in nude mice. On the contrary, NXT629 does not display suitable pharmacokinetic properties for further clinical development, it serves as useful molecule for in vitro and in vivo exploration of the effects of PPARα antagonism.

In conclusion, NXT629 is a novel, potent and selective antagonist of PPARα that is efficacious in disease models.

Ruxolitinib (INCB018424) is an Orally Active JAK1 and JAK2 Inhibitor

Ravoxertinib is an Orally Active and Highly Selective ERK1/2 Inhibitor