The occurrence of many cancers is due to a mismatch of chromosomes. It leads to the formation of aneuploidy and incomplete genes, and hence triggering an imbalance of cell cycles or divisions in the mitotic phase. Aurora and Polo-like kinases (PLKs) control the G2/M phase in cell mitosis. They are crucial targets for cancer cell proliferation. Aurora kinases family are a group of serine/threonine kinases that regulate mitosis, including Aurora kinases A, B, and C. Aurora kinases participate in several cellular events, including centrosome maturation, spindle assembly, and chrome separation. PLK is another serine/threonine-protein kinase, including five subtypes (PLK to PLK-5) in human cells. Inhibition of PLK prolongs the mitotic arrest, which is involved with the formation of unipolar spindle bodies, and eventually induces cell apoptosis. AAPK-25 is a potent and selective Aurora kinase and PLK dual inhibitor. It has anti-tumor activity. 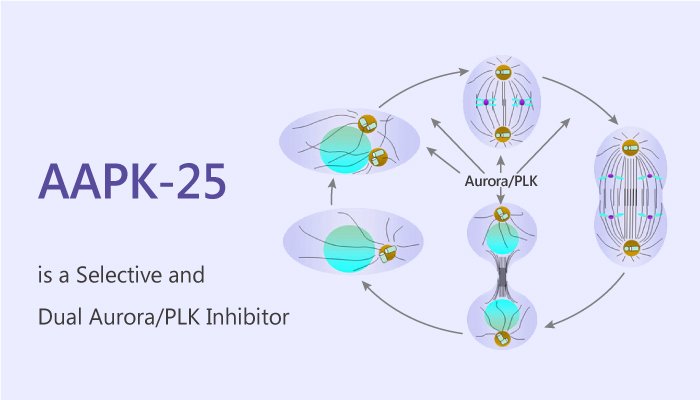 AAPK-25 targets Aurora-A, -B, and –C (Kd values of 23, 78, 289 nM, respectively) as well as PLK-1, -2, and -3 (Kd values of 55, 272, 456 nM, respectively). It also possibly interacts with a subset of kinases such as ERK and PI3K families. AAPK-25 regulates genes included heat shock protein, cell division cycles, MAP kinase, and centrosomal protein. Moreover, AAPK-25 significantly inhibits the development of colon cancer growth. AAPK-25 inhibits HCT-116, Calu6, A549 and MCF-7 cell growth with IC50s of 0.4, 5.3, 11.6, and 2.3 μM, respectively. In addition, AAPK-25 induces apoptosis in a dose-dependent manner in HCT-116 cell line. It has significantly increased histone H3Ser10 phosphorylation, indicating a markedly mitotic block. AAPK-25 is in notably inhibition of the mitotic spindle checkpoint. it is mainly mediated by cell cycle signaling and mitotic pathways.

To sum up, AAPK-25 is remarkably selective to both Aurora and PLK families. AAPK-25 has a great potential to be a chemotherapeutic agent in clinical use.