Myeloid cells are an abundant leukocyte in many types of tumors and contribute to immune evasion. The major populations of tumor-infiltrating myeloid cells include tumor-associated macrophages (TAMs), myeloid-derived suppressor cells (MDSCs), and granulocytes. A feature common to all of these immunosuppressive cells is their expression of the enzyme arginase 1 (Arg1). Arg1 catalyzes the hydrolysis of the amino acid L-arginine to produce urea and L-ornithine, thereby depleting extracellular L-arginine. Meanwhile, T cells are auxotrophic for L-arginine, requiring the amino acid for the rapid and successive rounds of proliferation that follow T cell antigen receptor (TCR)-dependent activation of effector cells. Blocking Arg1 activity in the context of cancer could therefore shift the balance of L-arginine metabolism to favor lymphocyte proliferation. In this study, CB-1158 is a potent and orally-bioavailable small-molecule inhibitor of Arg1. The IC50s of 86 and 296 nM for recombinant human arginase 1 and 2, respectively. 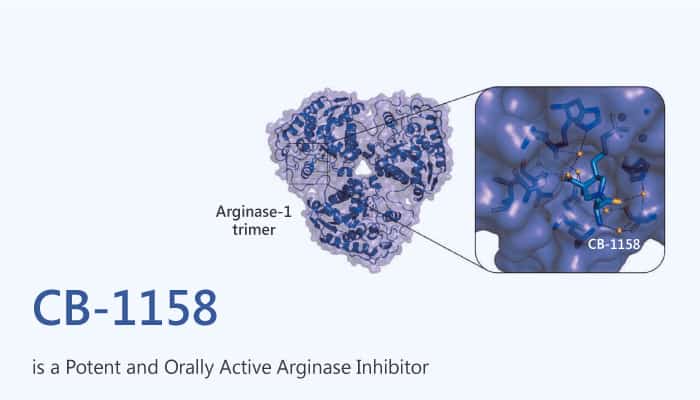 HM03 is a Potent and Selective HSPA5 Inhibitor